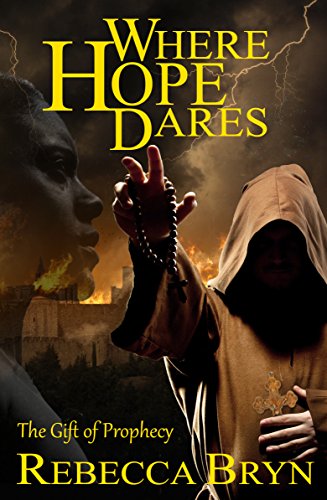 This book will please readers who like epic, dramatic dystopian novels with a strong message.

Epic, thought-provoking dystopian fantasy. The Second Coming seems imminent and, when Kiya is kidnapped to fulfill an ancient prophecy, Abe must choose between his friends and mankind’s immortal souls.

Two very different, isolated cultures clash and Kiya is raped and taken north across the High Atlas Mountains to a brutal, pagan High Priest intent on war at any cost. Raphel, Kiya’s storyteller husband, sets out on a thousand-mile journey to rescue her with only hope and a headful of stories to aid him. They look to Abe for help, but he is torn by his secret agenda decreed by a long-dead pope.

It is Raphel who has to find the courage to uncover an uncomfortable truth about the prophecy upon which the High Priest pins his hopes. Raphel and Kiya find help where they least expect it, but who can they trust – friend or foe?

A tale of hope, courage, and faith against greed, brutality, and evil.

Fascinating afterword for those interested in the science behind the story.

This is an amazing book. I am so glad I read it – I enjoyed every page.

The writing is masterful – it grips you from the very first word and keeps you hooked until the end. I have found some dystopian fiction to be predictable, but in this case, the story goes along paths that you don’t expect.

I found myself identifying with the central character, despairing at the rape and callous treatment of her, but taking heart from her love and the deep bond with her husband. She is not without her flaws, and her naivety is an interesting counterpoint to her knowledge as a herbalist. I thought the characters were very well drawn – they all have a depth to them, and even the representation of evil is not one-dimensional.

The book is set far in the future, supposing enormous upheavals around the globe in our time, with an ice-age ensuing – very topical in these days with all the talk about climate change. But this is a book that stands out from the crowd and has a different perspective on what might follow such catastrophe. I won’t give you any spoilers – suffice it to say that I was very impressed!

Where Hope Dares is voluminous yet gripping from the very beginning. It takes place in the future of planet Earth but has an ancient feel to it. It felt as though I was reading a myth or a legend. Though there are many subplots, it’s mainly a love story between Kiya, a gifted healer, and Raphel, a talented storyteller. Their beautiful relationship is interrupted by Kiya’s captivity and sexual sacrifice, but the connection between them is so strong and powerful that none of the outside evil can bring them down.

I found this to be a breathtaking adventure. Some parts were tough for me to read, and the overall mood is dark and dramatic, but very captivating. I liked the idea of the future / past synchronicity, and how the author depicts the future of humanity as a reference to the ancient times.

It makes you think whether history cyclically repeats itself. I also enjoyed the spiritual tone to it and the nicely weaved in ecological messages.

I could feel the expertise and diligent work of the author and sensed how much she worked on developing the story’s world and the characters. Hats off to her work!

I think this book will please readers who like epic, dramatic dystopian novels with a strong message.

Please click HERE to find Where Hope Dares on Amazon.