Daily Review: On the Hook by Cindy Davis 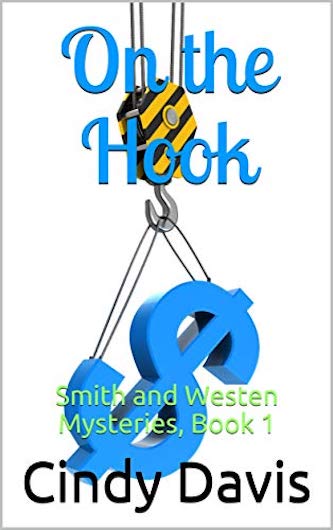 Smith and Westen join forces on a rollercoaster ride to find one of the world’s most valuable paintings.

A Picasso painting, worth a hundred million dollars, disappears en route from Chicago to New Hampshire.

En route is to be taken literally because it happens while the truck is moving. The painting is there, then it’s not. It’s gone, but it can’t be.

Kendra Jean Valentine, underwriting agent for the policy, is on the hook.

She scrapes together enough to hire two women to work the case. Two ‘regular’ women no self-respecting insurance agent would look twice at. Which is exactly why KJ thinks they’re perfect.

With creditors phoning daily, she jumps at the chance to earn a bundle of easy money, even though the offer comes from high school nemesis KJ Valentine, who stole everything in high school: head cheerleader, homecoming queen, and the star quarterback.

KJ pairs her with Westen’s total opposite.

Ten percent of a hundred million is…

Well, it’s a lot so Smith and Westen join forces on a rollercoaster ride to find one of the world’s most valuable paintings.

Great characters and a complex locked and sealed transport mystery in this high-end art theft made it a page-turner. I read straight thru and can’t wait to read the next book in this series.

Two single women with the help of a third take on new challenges that will challenge them and change their lives.

Cindy Davis introduces us to Smith & Westen and you are going to love these ladies.

A hundred million dollar Picasso has been stolen. The underwriter has been arrested for the theft. Two unlikely women were hired to locate and return the painting

The two women, Weston and Smith, are mismatched and untrained. Their approach to life, their reasoning process, and their personal preferences all differ. It is a mystery match made for success.

On the Hook is a fast-paced page-turner that will hold your interest to the end. Every clue is presented and dissected to allow the reader to join in the hunt. The two main characters are charmingly honest and perfect for a series of novels.

I highly recommend this novel. Buy it today and have some fun this weekend.

This mystery was a fun book to read, because of the characters investigative abilities which were nil, according to their interpretation. Smith and Westen are engaged to find a missing Picasso because of a friend’s position as an insurance underwriter when the painting got stolen.

Each of the women has their problems and need the finder’s fee, so they proceed to do due diligence in their quest. That search leads to some enjoyable confrontations, by interviewing the people involved in the action that brought about the theft.

The two detective ladies ask the right questions, but it is their ingenuity and visual perception that lead them in the right direction. Their combined talents would make Sherlock smile – they think out of the box and outsmart professionals in the task at hand.

I enjoyed the banter amongst the two and the prose of the author. I’ll be back sometime to see if Smith and Westen will shoot straight again without a little bloodshed.

Please click HERE to find On The Hook on Amazon.