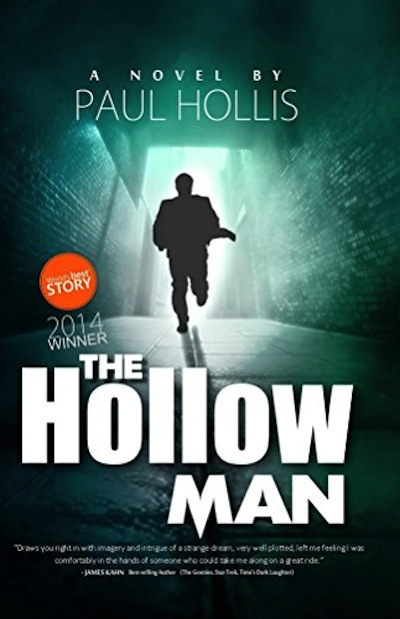 Hollow Man is  a new sort of thriller: tight but literate, lush but lucid, fast-paced but often pausing to drink in the gorgeous European scenery.

I don’t care for most thrillers because within the genre, plot tends to drive characterization, and I prefer the reverse. I read books to find characters who seem as real as anyone I might see in real life. Fast-paced thrillers often seem one or two-dimensional to me.

In HOLLOW MAN, however, Paul Hollis manages to create not just one, but several real people. The characters in this character-driven thriller are as real, as compelling, as three-dimensional as any I’ve come across in real life. And this is the mark of a great book.

As an AIA reviewer, I have the privilege and sometimes the curse of reading a lot of Indie books. As an author and a lifelong reader, I also read many traditionally-published books. Without reservation or hesitation, I would argue that HOLLOW MAN is one of the best, if not the best, novel I’ve come across in 2013. It is a benchmark of thrillers, but it’s also a new sort of thriller: tight but literate, lush but lucid, fast-paced but often pausing to drink in the gorgeous European scenery.

Hollis is a very visual writer. I could see the countryside unfurling from the train window. I could picture the blood spurting from one of the many villain’s carotid arteries. I could picture the ghost, a murdered little girl, translucent, yet lucent (for real, Hollis uses this word), forlornly gazing into a camera, or into the main character’s eyes.

Speaking of cameras, HOLLOW MAN belongs on the big screen. I’m hoping that Hollis ships this novel to either Indie filmmakers or perhaps to the titans in Hollywood. I predict that if this is adapted for film, it will be a mega hit.

In December 1973 in Madrid, Spain, a young NSA agent is attempting to track down on his own information on an unknown one-named terrorist assassin responsible for an earlier embassy attack, when his superiors demand he change his mission and follow the new Spanish prime minister, recently appointed by the Spanish dictator Generalissimo Franco.

Our NSA agent is haunted by dreams of a young girl who died in the embassy attack and is not pleased by this distraction, but an explosive assassination winds up crossing his path with his antagonist, drawing crosshairs back toward him. As our agent escapes attempts on his life, connects and partners with a fellow MI6 female agent, and tracks down clues about his nemesis’ plans, he uncovers a plot threatening the entire European economy.

Deftly told mainly from the deep mental perspective of the novel’s hero, whom readers only learn his nickname of Doc halfway through the story, the author masterfully creates a thrilling historical suspense thriller. It is, in essence, a slightly hyped-up spy thriller without the gadgetry, only disguises on the fly, guns and knives weaponry, and simple C4 explosives.

I felt more engrossed in the story with an unnamed hero dealing without the super-training of a Jason Bourne or the super-gadgetry of a James Bond that fit well within the mid-70’s time frame.