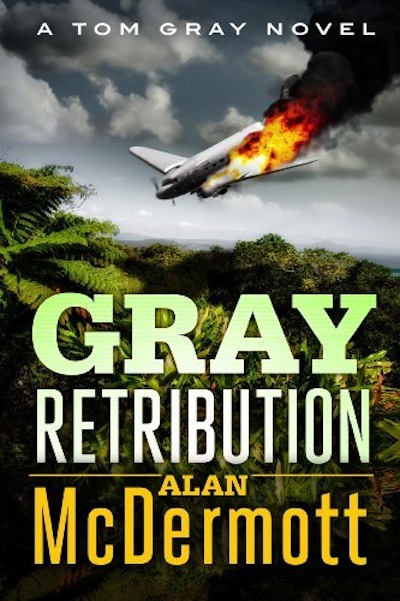 Using the SAS skills that kept him alive up to now, Tom Gray explodes off the page, and with vengeance.

Tom Gray is enjoying time with his family after the birth of his daughter, now three months old, and just wants an easy home life. However, trouble has a way of finding him. While he is visiting his uncle’s new grocery store, thugs arrive demanding protection money, and in the ensuing fight, Gray is hurt.

As he recuperates, Gray learns that a team of friends is facing grave danger on a mission in a tiny war-torn African nation, where an evil warlord is kidnapping boy soldiers to do his work in his bid for supremacy.

Gray sets off on a rescue mission, but with his attention now divided between two continents, events are spiraling out of control, and Gray must fight to save all that is dear to him.

In Gray Retribution, the fourth book of the popular, action-packed Tom Gray series, suspense builds to an unforgettable ending.

This is the fourth book in the infamous series featuring Tom Gray; the former SAS soldier who lost his family in the first book, Gray Justice, and then kept the nation captivated when he attempted to change the manner in which justice was handed down to violent criminals.

Like its predecessors, Gray Retribution moves along with break-neck speed persuading the reader to continue flipping through the pages, and then hours later, you (meaning me) realized you missed your latest meal.

As an avid reader of action-oriented thrillers, I thoroughly enjoyed how Alan McDermott kept me engaged through the fast pace of the writing, with snippets of action occurring every few pages, leaving me desperate to read more.

Equally appealing was the fact that three climatic events, occurring simultaneously in different parts of the country, intertwined to form an intriguing plot, with exhilarating action scenes from this highly skilled writer. The scenes kept the adrenaline surging, and with no lull in between.

With the fear of his security firm collapsing, his crew caught in the cross-hairs of a war by a militant group trying to take over a foreign country, and his wife’s Uncle threatened by a mafia-style family with a big wig on his payroll, the story kept me captivated.

Needless to say, violent actions abroad and back at home, with innocent victims paying the price, Tom Gray had no choice but to step back into the action, even though the decision caused a major rift at home.

Using the SAS skills that kept him alive up to now, Tom Gray explodes off the page, and with vengeance.

GRAY RETRIBUTION is another winner! This is the 4th book, and latest in the series, featuring Tom Gray and his Security firm, and just like the first 3, leaves the reader wanting more and more and more of TOM GRAY!

The Writer, Alan McDermott, has done another superb job! While the book, Gray Retribution, is the 4th in a series, it is so well written, that is a great “stand alone” book if you haven’t read the other 3 titles, it’s okay, because you still know what is going on! Mr. McDermott gives enough details so the reader feels just like they are there in the midst of the story, as the bullets fly, but is not so Nit Picky detailed that the reader feels overwhelmed by the details and fails to be able to follow the story line.

All the supporting characters, like Sonny, Vick, and bad guy Hart, are well fleshed out and totally believable as, living, breathing, people! The action in the story is intense and ebbs and flows like real life! Mr. McDermott has Tom Gray diving into action within the first few pages, and you won’t have to wait until the end, like some books, to be totally engrossed in the story!. The action starts early and continues all the way to the last page!

Don’t start the book if you only have a few minutes to read, because once you pick this one up, you won’t be putting it down until the last page is turned! Overall, an EXCELLENT READ! Cant wait for book, 5, and 6, and 7, and……!! On a side note, the Author, Alan McDermott, is a very talented and unique writer!

He actually READS and personally responds to emails from his readers! He is a successful writer that his humble enough to listen to his readers, and seeks out suggestions, and ideas to help his writing and to provide the readers with what they are looking for in a novel!

I found this to be very refreshing and just this personal touch has caused me to be even more supportive of Alan McDermott!

Please click HERE to purchase your copy of Gray Retribution on Amazon.