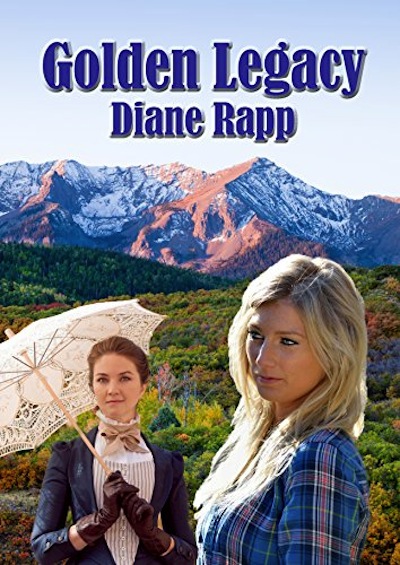 Golden Legacy blends historical adventure with modern-day mystery in an exciting novel that follows two time lines. Embarking on a harrowing treasure hunt, two daring heroines tackle the hazards of gold country more than a century apart. Although a stand-alone novel, readers who have already met Kayla and Steven in the High Seas Mystery series, may enjoy their continued love story in the Rockies. See real places around Ouray, Colorado through actual photos within the narrative.

Ginny is a “modern” English gentlewoman traveling alone in the year 1888. At the age of twenty-five, she deems herself a spinster, admitting the condition results from her own decisions. After Ginny gains control of her own money, she sets out to travel the world, hoping to publish a series of travel journals.

Upon landing in San Francisco, Ginny’s aristocratic life drastically changes course when she learns that miscreants shot her twin brother, Johnny. Ginny journeys by train from San Francisco to Ouray, Colorado, faithfully recording events in her journal. After tending to Johnny in hospital, the gutsy woman strikes out to locate his hidden gold mine, armed with courage, a fountain pen, and two sharp hatpins. It is her duty to deliver supplies and information to Nick, her brother’s business partner and dear family friend.

In modern day action, Kayla and Steven deal with aftermath from the aborted murder attempt on Kayla after their wedding. Plagued by turbulent dreams of drowning, Kayla develops a paralyzing fear of open water. She’s summoned to a dying aunt’s bedside and jumps at the chance to trade life at sea for the comforts of home in Colorado.

To inherit the family legacy, Kayla must solve clues and locate the family gold mine. After reading Ginny’s journal and searching for clues scattered throughout a charming Victorian house, Kayla and her friends endeavor to find the mine.

They cross hazardous terrain through wild country and face tricky problems inside the derelict mine. Old generators lie dormant, and they need to activate a trompe to open the “safe” inside the mine. Clues purloined from the house might guide disgruntled heirs to steal the treasure for themselves.

Kayla struggles to decipher the mystery before snow falls, testing her courage, ingenuity, and honesty to qualify for the golden legacy. Can she overcome fear to reveal what is most important to her future?

It’s like a Reece’s Peanut Butter Cup… or a Twix… or a Tootsie Pop. It’s two treats in one! Diane Rapp skillfully weaves a modern day cozy mystery with a historical adventure. Artfully switching between the past and the present, she left me on the edge of my seat as she revealed the clever and original plot.

I’ve read several of Diane Rapp’s books, and I’m always amazed by her skill as an author and her unique story-lines. She never uses the formulaic approach in her novels.
Golden Legacy was even better than I expected.

I haven’t read the other books in the High Seas Mystery series, but now she’s got me hooked. I think a good review is supposed to give a caveat, but I haven’t got one. Read it–you’ll like it!

Diane Rapp has pulled off a bold trick here, playing with the formula of her bestselling High Seas mystery series. ‘Don’t mess with the formula’ and ‘Don’t fix it if ain’t broken’ are the two top commandments that writers fear to break. And readers who support this timidity help to ensure the result: we get more of the same, only more so, over and over again.

What has Ms. Rapp done that’s so different this time? The other reviewers have admirably summed up the complex dual story line. That in itself was a heck of a feat, as was moving the cruise-bound series to land…and from exotic locales to Colorado. But transforming Colorado into an exotic locale by showing it both Now and Then is nothing short of brilliant. Imagine finding the most exotic port of call on land, and in the USA.

Now, about the dual story line. It is dual, in the strictest point, only up to a point. Ms. Rapp shakes up the structure when it suits her: Chapter 5 and Chapter 6 have no journal entry between them, allowing the author pick up a little more steam. And the journal ends after its 19th entry/epilogue, allowing the story to rush to its conclusion in the last nine chapters, all set in the present. A classic treasure hunt ensues.

It’s best not to think of this as a mystery cut from the same cloth as the other three. Certainly not as a thriller,though it has thrills to spare. Nor should we set it as a total departure from form. Though it combines history, romance, travelogue, mystery and suspense, it’s an inland journey on home ground…with the spirit of the High Seas.

I salute this author for this impeccably researched, cleverly structured and deeply felt book. Highly recommended. 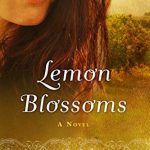