Daily Review: The Girl in the Window by Jake Needham 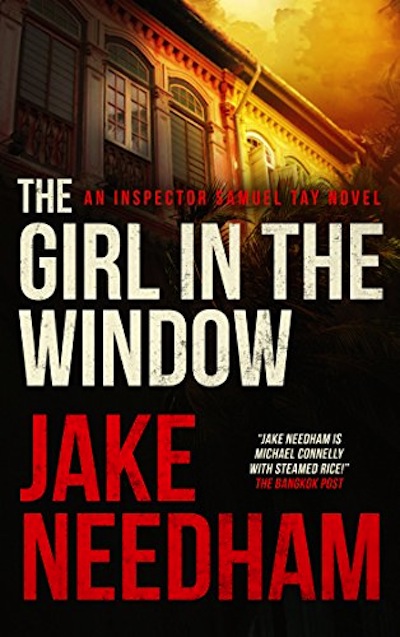 Singapore is a good house in a bad neighborhood. Three hundred million Muslims live in Indonesia and Malaysia completely surrounding the barely five million people living in the secular city-state. Islamic terrorism in Asia may not get much attention in America or Europe, but it gets plenty in Singapore.

They’ve been hit once already. Not long ago, coordinated truck bombs laid waste to three American hotels in Singapore. Thousands were killed and injured. And everyone knows it’s just a matter of time before Singapore gets hit again.

Abu Suparman is the messianic leader of a radical group of Indonesian Muslims fighting for ISIS in Southeast Asia. Most people think Suparman was personally responsible for the Singapore hotel bombings. When Singapore receives a tip that Suparman is slipping into the country to meet a sister having cancer surgery, Inspector Samuel Tay gets the job of finding him before something nasty happens.

It seems at first to be a straightforward assignment. Tay is given two officers to work with him: his own sergeant, Robbie Kang, and Sergeant Linda Lee, a capable officer with whom Tay once had a disastrous and blessedly brief personal relationship. All they have to do is keep the sister under surveillance until she leads them to Suparman, right?

The surveillance turns into a shambles, people die, and Suparman vanishes. Tay’s only clue to what really happened that rainy night on Serangoon Road where everything went down is a girl he briefly glimpsed watching it all from a building next door.

Tay’s quest for the girl in the window takes him on a terrifying journey into a no man’s land where there are secrets so big governments will kill to protect them. With the help of John August, a shadowy American with murky connections, Tay battles governments determined to bury the truth in order to unmask the politicians using their power and position to hide their own crimes.

Tay knows exactly how to do that.

If he can just stay alive long enough.

The story line of this book returns to the early, cynical writings of Jake Needham, writings that I always liked a lot. The plot builds on the previous Samuel Tay novel, but there is no problem reading this stand-alone.

The story is set in the present, sadly unrestful life with terrorist coming out of the woodwork everywhere around the globe. It deals with the people who needs to try to prevent these attacks and it deals with the ultimate question “Quis custodiet ipsos custodes?” – “Who will guard the guards themselves?” Very good read, with the plot twisting and turning, and with the outcome slightly more unexpected than you would have thought.

It sadly finished far too quickly, so now I will have to wait until the next release is out (which I hope will be very soon). Don’t miss this book!

Suspenseful, smart, funny, not overly graphic, this mystery could be set in Rome, Miami, Mexico City or any place where heat, corruption, and intrigue braid a rope to strangle the truth. But this book is set in Singapore, a city/state known for its efficiency and cleanliness.

Inspector Tay knows better. Tay is like a Southern style Poirot. Instead of scurrying brusquely ferreting out clues, Tay languidly leans against a wall, smokes his cigarette and notices what no one else sees. As he inexorably peels the layers of the onion the truth is revealed. But what then? What to do with your dead mother who keeps interrupting your sleep? What to do when you know the truth and it’s going to kill you.

This Tay book is fourth in a series and the best yet. It is a standalone. If you haven’t read the series dash to the Amazon store because that’s about the only place you’ll find the first three books and they are all worth it. Every. Single. One.

Any day is a good day to read one of Jake Needham’s novels. They are witty, urbane, and filled with fascinating characters. THE GIRL IN THE WINDOW is no exception and marks the return of cigarette and coffee addicted Singaporean CID Inspector Samuel Tay, the classic Needham character.

He had as yet found no satisfactory answer to either question.” Tay has internalized his growing cynicism to the point where he believes he no longer needs relationships with other people. But despite his painful ineptitude with people, he is a bulldog when it comes to running down leads.

In this instance, Needham has done his usual masterful job of creating a convoluted plot involving inter-agency rivalries, international terrorism and intrigue that keeps the reader guessing from the opening lines to the definitely exciting climax. Along the way, Tay manages to recover at least a portion of his ability to appreciate other people.

He is helped along the way by the repeated apparition of his mother’s ghost at the foot of his bed, and whether the apparition is real or a regular feature of Tay’s dreams, we are left to guess.

Please click HERE to purchase your copy of The Girl in the Window on Amazon.