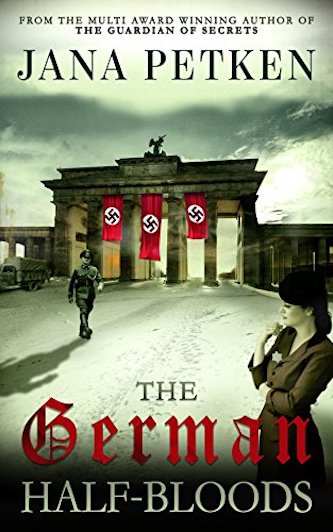 A historical novel steeped in horror, danger, and suspense – a true page-turner.

I’m a great fan of this author, having read all her previous books so it was with great interest that I purchased this new book and venture into a very dark time in history: Nazi Germany and Hilter’s attempted Third Reich.

Without retelling the story what I want to say is that this is thus far my favorite Petken novel. For a subject matter that had been written about and rewritten about ad nauseam, I didn’t know what to expect. Would it be more of the same rehashed WW2 storyline? Yes and no. Yes, it covers the historical issues, bringing them successfully into the story.

But no in the sense that the author captures emotions so vivid, creates conflict so challenging, that it reads as something fresh and intriguing. Tackling a very dark subject within the story is eugenics and where this leads kept me glued to the pages and reading well into the night. The characters ring authentic and the action burns from the page.

The only disappointment is that the story ends. But thankfully, it’s the first in a series and I can’t wait for the rest. This is a terrific stand-alone first book in the German saga and I’m thrilled that one of my favorite authors has more coming.

Petken has written a book that is steeped in history set in a time when the world was in disarray. This story focuses on the Vogel family and the reader gets to meet them from the opening paragraph, then watch them being separated and sent to different parts of the world by the mechanism of war and Hitler’s Germany.

As a reader who is familiar with the history of that time in Europe, Petken did her research well, and sets up the environment so brilliantly, that if the reader breathed deeply he/she will smell the stench of war, for me almost eerily. But by focusing on the Vogel family, as they struggle to go through life in what has become their norms, the reader got to meet each one, to like or hate, as the case may be.

I fell in love with Paul and his instant attraction to Judith. I like Judith’s character too. There are too many to like and applaud. The author gives the reader a glimpse into the daily lives of her characters, as they struggle to accept the changes that were taking place around them.

This is a brilliantly written book, from beginning to end. I have nothing but admiration for the author for taking events from a time in history that most would like to forget. Petken puts a human face on the Nazi’s war machine, making it more palatable.

The author makes the reader see the adaptability of the human spirit as it deals with the atrocities of war. Bravo!

Please click HERE to find The German Half-Bloods on Amazon.