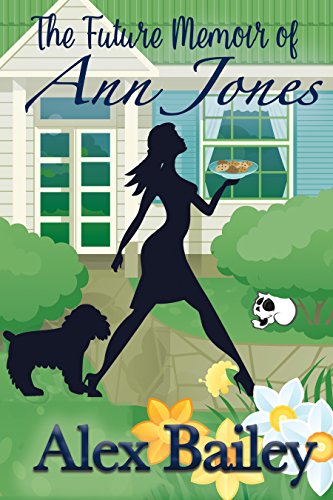 Steel Magnolias meets Stepford Wives. Moving, powerful, enchanting, and brimming with a glorious cast of characters; this is a joy.

Ann Jones knows the difference between a daydream, a fantasy, and a vision.

She’s a decent, middle-class mom with a respectable husband and two kids.
And a “wild imagination.”

But what kind of decent woman imagines her husband dead, a relocation across the country, a new career, the perfect boyfriend, and most importantly, Knitting Club?

Not just any old Knitting Club. This one has rules—not one of them concerns knitting.

Ann listens to the club members’ stories, becomes entangled in their lives, obeys their rules, and keeps her suspicions to herself.

Her independent existence is an awakening. Ann Jones has changed.

So what happens when she wakes up?

The Future Memoir of Ann Jones is a dark but airy comedy with a homey yet subtly magical realist overtone that kept this reader swiping pages. Though the writing is a bit uneven a few times, the whimsical, dark romantic suspense tale rises above any small technicalities.

Alex Bailey’s characterizations of Ann Jones and the Knitting Club members – and their late husbands – are as unforgettable as the characters in comparable chick lit classics like Steel Magnolias or man cave bestsellers like Fight Club. I’m a recent though slightly older empty nester, I have many things in common with the recently widowed Ann Jones, especially with her adaptation to her newly adopted hometown after her kids leave for university.

I had a good laugh at myself many times through entering the story world and laughing and loving with the characters. Alex Bailey deftly keeps the mystery of why no who joins the Knitting Club can ever leave it or miss the weekly meeting, as a breezy aside wafting through what could have been a more sullen and tortured story.

It’s this union of sunshine and shadow and the vibrant characters that make this novel a fun read. Keep an eye on this writer – bet she’s poised to amaze us with upcoming work.

Have you ever had the desire to just pack up your life and start all over again?  To break free of the chains that bind you and discover new, like-minded friends and exciting opportunities.  Do you believe that this could ever become a reality?  Or maybe it is just pure fantasy, best left for daydreams and reverie.  Fantasy or not, this is the premise of Alex Bailey’s novel, The Future Memoir of Ann Jones.  However, all is not as it seems to be in this book.  It has as many twists and turns as a labyrinth!  For lovers of intelligent, engaging and gripping writing…this novel is a must read!

Essentially, the book follows the escapades of Ann Jones who has a vision that her husband dies.  After his death, she dreams that she moves to the East Coast to start a brand-new life.  In this peculiar vision, she buys a beautiful new house, starts a successful business and ultimately finds the love of her life.  Also, she joins a local knitting club which is by no means your typical hobby group!  The knitting club is serious business with harsh and unyielding rules.  In fact, the club brings the following phrases to mind:  “Once you are in you can never get out” and “what happens in the knitting club stays in the knitting club!”  This dream scenario is told by Ann to her best friend Alex.  Her friend, in turn, writes out the entire version in a letter to her own sister and asks for advice about how to help Ann.

One would be sorely mistaken to think that the plot of this story sounds even remotely simple or straightforward.  It is, in fact, quite the opposite.  In truth, the beginning of the tale can actually be difficult to comprehend at first.  However, when the reader begins to make the necessary connections in the story and fit the pieces together, the story quickly proceeds to flow like a raging river.  It is full of fresh ideas, compelling themes and twists and turns lurking around every corner.  While the overriding main idea in the novel for me personally was “you are never alone”, there are a number of other prevalent themes as well. For instance, inherent loyalty and the freedom presented by new beginnings are powerful concepts within this book.  There were also some very dark ideas as well.  In fact, the ability to pen a novel which is written in such a way that the very dark tone is camouflaged by a light and effervescent manner, reveals the true skill of the author.

While the plot is imaginative and compelling, the numerous characters are very cleverly portrayed as well.  Ann is obviously the main character and as such, she experiences significant growth throughout the story.  She starts out as quite timid and unsure of herself but ends up developing into a confident and competent woman within her own right.  The story contains numerous other players as well.  Each is described in very satisfying detail and grow appropriately according to their role in the book.  The author also utilizes her characters to deliver many of the very humorous and lighthearted scenes which are so integral to the book.  This clearly illustrates the author’s understanding of the need to use the various elements of fiction together to enhance her story.  Alex Bailey knows how to weave her craft!

I found that once I really got into this novel it became near impossible for me to put it down.  The characters were colorful, convincing and hilarious.  The setting was described in just enough detail to create an image in the mind and make it believable…yet not overdone to the point of risking losing the reader’s interest.  The plot was full of mystery and darkness… but projected in a bubbly and vivacious manner!  The ability to pull this off is absolutely the charm of this novel and what makes it so truly unique.  It is a wonderful writing style that this particular reader found captivating and completely engaging.

Please click HERE to find The Future Memoir of Ann Jones on Amazon.