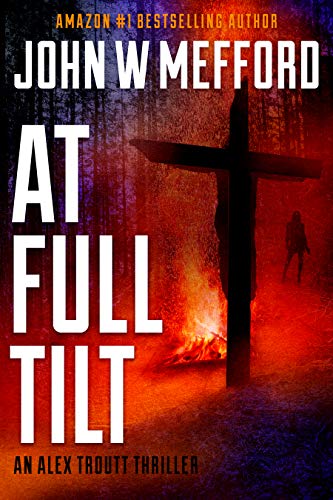 Talk about an edge of your seat. I was literally scared for them.

A power that few have possessed.

And a secret that will unleash it.

He has a plan. He watches it unfold. And one by one, three lives crumble into dust.

Flares of desperation divert the focus — can Alex see through the fog of deception?

The killing season is just getting started. It’s an evil too sadistic to fathom. Is there any way that Alex, Ozzie, and Ivy come out of this alive?

A brutal savagery devours one life after another. But who’s really behind this killing spree? Where does Alex fit in this nightmare?

As a thirty-year-old secret emerges, the ties that bind people will be redefined.

Murders in at least three different cities in the US. Are they connected? No way it could be the same killer. How many more are going to die before they catch the killer?

The last book in the Redemption series by John Mefford is an excellent book. I gave it 5 stars because it is well written, the characters are believable and connected to each other.

You can read this as a stand-alone book or you can read the earlier books in the series. Whether you read just this one or the whole series, you’re in for a real treat.

John W. Mefford skillfully wrote The Redemption Thriller Series and the characters therein, so that they wrapped themselves around my heart and I will cherish this series forever. AT Full Tilt brings to a close this series with no less than all the impact of all their previous books put together.

If there had to be an ending, at least the ending was incredible! Sad the series ends but happy and better for having read this series.

So looking forward to next series, and more of what wonderful writing I read in AT Full Tilt.

Wow! What a way to end a series. I figured that this being the final book in the series I would be in for a thrilling ride. Well, the ride was more than thrilling it was explosive, spectacular and electrifying. It is a fitting end to what I believe is an awesome series.

I will seriously miss these characters. They have become a big part of my life. I traveled alongside them as they navigated through personal and job-related issues. Issues that would drive anyone insane, but their inner strength aided them in overcoming these problems.

The series on a whole was emotional, but this installment took me through the wringer. How much more can they take?

Ivy, Alex and Ozzie can never seem to get a break and it was no different in this installment. Persons close to them are being murdered or attacked. The question is who in their circle of friends would be next and who is responsible for the murders.

Talk about an edge of your seat. I was literally scared for them.

Please click HERE to find AT Full Tilt on Amazon.