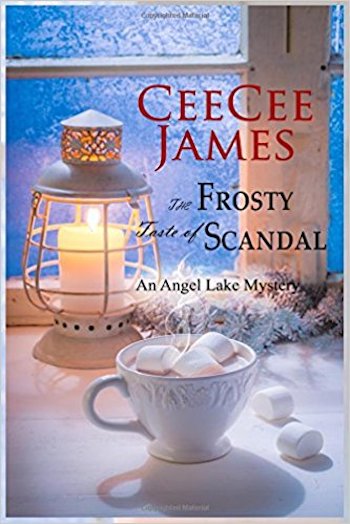 With the killer hiding in plain sight, Elise can’t narrow down the suspects… this may be her first case where the killer gets away.

Elise Pepper has had dates ruined by cold-hearted men before, but she’s never had one quite this cold. Cold, as in dead.  Instead of an evening of flirting and ice skating, Elise discovers the dead body of Mr. Hamilton, a mortgage broker with a reputation for shady deals…also known as the Ice-man.

Apparently, the murderer had a sense of humor. Or irony.  When Elise’s co-worker Sue turns out to be related to the dead man, Elise knows she has to help find the murderer. Between a freak power outage will and a seemingly endless list of people who had good reason to want him dead, Elise has more leads than she can follow.

Even the King and Queen of the high school Winter Ball are under suspicion!  With the killer hiding in plain sight, Elise can’t narrow down the suspects… this may be her first case where the killer gets away.

No spoilers here. This time Elise is getting things right and, as usual, finds herself in the middle of a mystery. And, as usual, Brad and Lavina are right there with her, trying to make sure she doesn’t become the next victim.

This is a clean, wholesome story with engaging characters and an interesting puzzle to solve. Also of note: Lucy’s story is progressing nicely and I’m curious to see where the teen ends up. And, ack! Mr. G, all I can say is, wow! Didn’t see that coming at all.

CeeCee James sent me her latest Angel Lake Mystery, The Frosty Taste of Scandal, and I loved it. Best first chapter I have read in the longest time. Loved this book all the way through. The mystery was fab and the murder weapon well very smart and tied in beautifully to the story. I could not put it down, reading well past my bedtime to finish.

I said and thought “ooh!” so many times in this book. Loved the twist at the end and the cozy feelings this book left me with. Perfect holiday read with all the feels and so much more! From the title to the cover and all the words beyond it, I was thrilled! Read it! That’s my advice!

At what was supposed to be an ice skating date with her fiance, Brad, Elise Pepper discovers a dead body seated on the ice machine. The body turns out to be that of Roger Hamilton, the General Manager of the Hamilton Securities.Bank. Unfortunately, Mr. Hamilton seems to be responsible for a number of shady loans made to the people of Angel Lake, most notably Grandma Babe’s Restaurant.

In a surprise move, the bank’s lawyer, Mr. Bingham, was able to block an audit by the FDIC which accused the bank of Predatory Lending. Not all of Mr. Bingham’s news was good though, as Roger’s family was informed that Roger had changed his will to include an illegitimate son that nobody knew about.

This story is fast moving with a lot of twists and turns. The final solution is a total surprise. Definitely looking forward to more of the Angel Lake series.

Please click HERE to find The Frosty Taste of Scandal on Amazon.