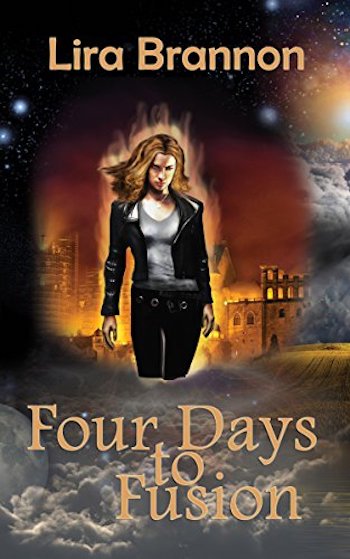 Brannon’s writing style is as hot as the stars she wrote about, almost setting the pages ablaze.

In a small town in the middle of the U.S., the only thing Seren wants to do is fit in. This proves difficult when everything about her is different and people call her freak behind her back.

Things change suddenly when she gives a boy her necklace, the one her parents told her never to take off. Next thing she knows she’s running for her life with a smart-mouth water globule with two personalities, putting out hot flashes that burn her clothes off and dealing with two boys she will have to choose between.

Four Days to Fusion is unlike anything I’ve ever read. It tells the story of a girl who doesn’t fit in, not because she lacks social skills or grace, or any of the other things that could cause a person to stand out unfavorably, but because she’s a star hidden in human form.

Lira Brannon begins the action – and I do mean action – on the first page and continues to fire away until the pages have disappeared. Brannon includes a taste of the next book at the end to tease the reader, and it IS a tease, since it seems the next book will be quite a treat, too.

Brannon’s writing style is as hot as the stars she wrote about, almost setting the pages ablaze. She created a main character that was quite likable and some very interesting secondary characters. Her descriptions of the heavenly bodies as living entities were beautifully graphic. This is a series that should appeal to readers of all ages.

By Today We Did

At fifteen all Seren wants to do is fit in. It’s kind of hard when her hair is screaming red and she constantly looks sunburnt, but things are looking up when the cute boy that she’s been mooning over invites her to the homecoming dance. She’s just getting to experience some normality when her life is blown apart. Seren has forgotten she is a star, and that her mum and dad are actually her bodyguards, and she’s a little older than fifteen… Seren must return to the skies to claim her rightful place as a queen, but King Palomar wants to prevent that at all costs and killing a few billion life forms, planets and solar bodies along the way don’t bother him at all.

Young adult science fiction at its best! Four Days to Fusion was entertaining, exciting and fast-paced. I haven’t read much science fiction lately, but I am very glad I read this one. I was hooked from the first chapter, with Seren’s parent’s odd behavior, and the action that followed. Lots of action in this story! It is told from a few different perspectives, but not difficult to follow at all. It’s a really great read.

Seren is a lovely lead character, full of self-doubt and clueless as to what she’s meant to do, but striving to do the right thing anyway. Although she has been often ostracised, she retains enough humanity and compassion to want to help others. I really liked Hy and O, their attitude reminded me of the fire demon in Howl’s Moving Castle, except they are water. It was interesting picturing this blob of water forming heads and limbs, and even moving about independently.

Trey and Emmett were the main male characters. Both were well written. Trey is somewhat dark and enigmatic, making him ever so more alluring. Emmett had his horrible sister around his neck like a chain, poor guy. There’s a little romance with Seren here, but it’s pretty tame.

Four Days to Fusion is suitable for high school students, but adults will also enjoy this wonderful ride into the galaxy. There is a preview of the next book in the series at the end, which left me quite excited for its release!