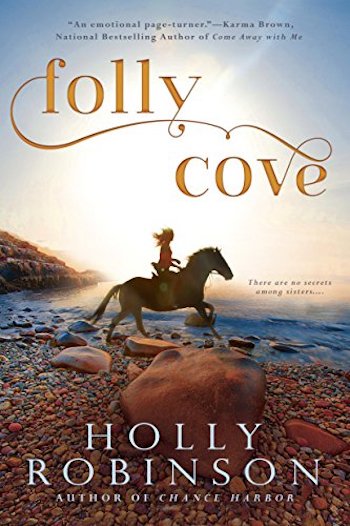 This is a book about family drama, family loyalty, family secrets and family love.

The Bradford sisters are famous in Rockport, Massachusetts: for their beauty, their singing voices, their legendary ancestors, and their elegant mother, Sarah, who has run the historic Folly Cove Inn alone ever since her husband disappeared.

The two youngest sisters, Anne and Elly, fled Folly Cove as soon as they could to pursue their dreams and escape the Bradford name, while Laura stayed and created a seemingly picture perfect life. After a series of bad decisions, Anne has no choice but to come home and face her critical mother and eldest sister, reluctantly followed by Elly, another Bradford woman who’s hiding something.

As the three sisters plan a grand celebration for their mother’s birthday, they struggle to maintain the illusions about their lives that they’ve so carefully crafted. But when painful old wounds reopen and startling family secrets are revealed, they soon discover that even the seemingly unbreakable bonds of sisterhood can be tested…

By page four I was hooked and sat up reading Folly Cove until 3am because I quite simply couldn’t stop. Set in the Cape Ann area of Massachusetts, this novel is the story of three sisters, their relationship to their mother and each other, and the secrets that affected their lives.

Holly Robinson is so adept at giving us characters we can relate to that by the time I’d finished the book, I felt like I’d been in high school with the three girls. Definitely my favorite of all her books.

Another exceptional Holly Robinson story! As always, the character development, location descriptions, and attention to detail capture your attention as soon as you open the book.

I just finished reading it yesterday, and I’m having withdrawal symptoms. What a wonderful book depicting the rocky road of relationships & the complicated issues within families.

You must read this book!

This is a book about family drama, family loyalty, family secrets and family love. It took me through a wide range of reactions: laughter, sadness, shock, frustration and understanding. This is one of the best family saga books that I have read, and I enjoyed it immensely.

Anne Bradford, the youngest of the three Bradford sisters, has returned home to Folly Cove Inn, after breaking up with her boyfriend. A boyfriend who happened to be a married man. And she is not returning home alone. She has a four month old daughter that her family knows nothing about. She does not know what type of reception she will receive but she knows she needs to go back and figure out what to do with her life.

Elly has also returned home at the request of her other sister, Laura. Laura is upset that Anne has returned, due to a nasty fight that the two have had. Since Elly is between jobs and does not have a serious relationship, she agrees to come and try to play peacemaker between the two.

Laura is the only one of the sisters that did not leave Folly Cove. She has stayed, married, had a daughter and opened her own riding stables. She knows that things between her and her husband are not great, but she is willing to do whatever it takes to make her marriage work and keep her family intact.

Sarah, the mother of the three sisters, is a no-nonsense type of woman. She has had to make sacrifices during her life to keep Folly Cove Inn open and successful. She has secrets that she has kept hidden from her daughters for most of their lives, and although she is not proud of that fact, she feels she had no choice but to keep certain things from her daughters.

Flossie, Sarah’s sister-in-law, is a new age woman and a thorn in Sarah’s side. Flossie knows all of Sarah’s darkest secrets.

The two do not get along very well at all, but the girls all love Flossie.

The characters are well developed, well rounded and three dimensional. All five of the female leading characters are strong willed, independent, smart women. They are not afraid of working hard and doing whatever needs to be done to help them achieve their goals. The one area in their lives where they flounder is in matters of the heart. They all seem to be cursed in love and all have track records of picking the wrong man.

The author is very talented in her descriptive writing and through much of the book, I felt like I was right there, watching all of the action taking place and listening in on conversations. I could picture the rooms at Folly Cove Inn and all of the traditions held in the rooms of the resort.

She is also very talented in writing the emotions of her characters, what they are thinking and feeling. At times the emotional turmoil and raw reactions felt so human and real. That was some pretty heady stuff and made for great reading. I enjoyed the fact that the book was told from four different points of view: Anne, Elly, Laura and Sarah. I felt this allowed the reader to learn more about each character’s background and the reasons behind how their lives have turned out.

I cannot recommend this book enough to anyone who enjoys a superbly written women’s contemporary. If I could, I would give this book more than five stars. Every time I had to stop reading, I found myself wanting to get back to the book as soon as possible. I will definitely check out the other books written by this author and I am looking forward to that.