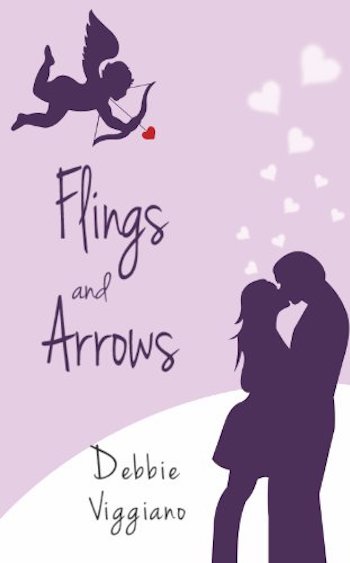 Steph Garvey has been married to husband Si for 24 years.  Steph thought they were soulmates.  Until recently.  Surely one’s soulmate shouldn’t put Chelsea FC before her?  Or boycott caressing her to fondle the remote control?  Fed up, Steph uses her Tesco staff discount to buy a laptop.  Her friends all talk about Facebook.  It’s time to get networking.

Si is worried about middle-age spread and money.  Being a self-employed plumber isn’t easy in recession.  He’s also aware things aren’t right with Steph.  But Si has forgotten the art of romance.  Although these days Steph prefers cuddling her laptop to him. Then Si’s luck changes work wise.  A mate invites Si to partner up on a pub refurbishment contract.

Widowed neighbor June adores the Garveys as if her own kin.  And although 70, she’s still up for romance.  June thinks she’s struck gold when she meets salsa squeeze Harry.  He has a big house and bigger pension – key factors when you’ve survived a winter using your dog as a hot water bottle.  June is vaguely aware that she’s attracted the attention of fellow dog walker Arnold, but her eyes are firmly on Harry as ‘the catch’.

But then Cupid’s arrow misfires causing madness and mayhem.  Steph rekindles a childhood crush with Barry Hastings; Si unwittingly finds himself being seduced by barmaid Dawn; June discovers Harry is more than hot to trot; and Tom’s latest strumpet impacts on all of them. Will Cupid’s arrow strike again and, more importantly, strike correctly?  There’s only one way to find out….

Very funny, well written and full of little surprises. Great characters in wacky situations. I particularly liked the ending; I don’t think I have ever laughed at the last line in a book before.

This is the first I have read by this author and I am going to download some of her other books right away!

A fun read that will probably appeal more to marrieds than singletons. If your children are at the toddler stage you may enjoy this story as an escape and if your family is older you will likely be amused by this tale of family life.

Si and Steph, a married couple, are facing various mid-life crises; their teenage son, Tom, seems to be a perpetual sex machine; their elderly neighbour, June, is very lonely and looking for love with her partner from salsa class. The characters, with a few exceptions, are very likeable, and it’s refreshing to find a middle-aged husband who doesn’t get carried away by the possibility of a fling with a bimbo who fancies him. Yes, some of the situations are predictable, but there are also some good laughs and we are sufficiently fond of the characters to want life to work out for them.

The characters, with a few exceptions, are very likeable, and it’s refreshing to find a middle-aged husband who doesn’t get carried away by the possibility of a fling with a bimbo who fancies him. Yes, some of the situations are predictable, but there are also some good laughs and we are sufficiently fond of the characters to want life to work out for them.

In a plot worthy of Shakespeare, the threads of each character twine and tangle into the kind of knot that is normally only seen in the presence of kittens and a ball of wool. At times I held my breath as one disaster led to another in a deadly domino run. The effect of it all is truly hilarious, right up to the wonderfully slapstick crisis.

It wasn’t Viggiano’s deft plotting that really made the book for me, though. It was the characters. Unlike most romantic comedy, Flings and Arrows deals with the ordinary and the mundane – middle-aged, working-class people married to each other, and some widowed old-age pensioners.

There are no violet or emerald eyes, no satin thighs, no high-flying corporate CEOs at the age of 22. Just ordinary people with ordinary lives, and this gives the work a solidity and, dare I say, a level of interest that cannot be achieved with fancy characters.

The author is clearly writing about the kind of people she knows, and this familiarity, combined with a firm and disciplined control of the story, made this book for me something truly special.

Please click HERE to find Flings and Arrows on Amazon.