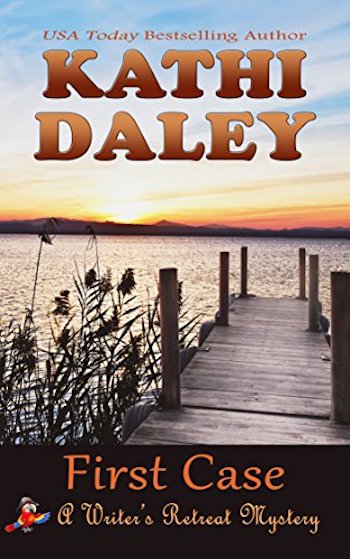 The mystery brilliantly wove together the two murder investigations, including the Friday 13th massacre.

The fact that Katrina Pomeroy had been murdered was in and of itself a newsworthy event. The fact that she had been murdered on Friday October 13th exactly eleven years after she’d been one of five teenagers to survive the Friday The 13th Massacre, made her passing worthy of notice by the national news agencies Jillian Hanford used to work for.

When an old editor of Jillian’s offered her the chance to write a human interest piece about Katrina’s life and subsequent death, she jumped at the chance to re-launch her currently defunct career. Of course in order to make the sort of impact she was after, she’d not only need to write about Katrina’s unusual life, but she’d need to answer the question of who was responsible for her death.

She knew she’d need help so she decided to enlist the help of the five writers currently living at the writer’s retreat on Gull Island. Jillian would soon discover a decade old secret covering a shocking truth that was better left unrevealed.

Jillian Hanford has temporarily agreed to take over her half-brother’s resort on Gull Island and turn it into a writer’s retreat. Several authors have already moved in with long-term leases taking advantage of the conducive environment for writing and unique collaborations.

Today’s collaboration is on the recent death of Katrina Pomeroy suspiciously occurring on the eleventh anniversary of the Friday the Thirteenth Massacre. Learning she is one of five survivors of the massacre and the killer had never been caught makes this story a hot topic. Jillian is a freelance investigative reporter hoping to turn this into a ‘human interest’ story, and use it to get back to the life she left in New York.

She sets off to interview the remaining survivors to verify events and try to reach a conclusion about what happened eleven years ago and why Katrina is the latest victim. With assistance from the authors at the resort, romantic possibility Jackson Jones, and reluctant Sheriff Savage, Jill gets more questions than answers which is further complicated when she receives a cryptic note, “Leave well enough alone.”

This just may be Kathi Daley’s best ever! My first glimpse of Gull Island and some of its inhabitants came from reading Treasure in Paradise from the Tj Jenson Paradise Lake Mystery series, but newbies need not shy away because, although Treasure in Paradise is a book I highly recommend, it is in no way a prequel to this series. Fans and newbies start out equal brought up to speed with the background provided about the characters in a prologue-style introduction: The Writers, Townsfolk, The Victims and Suspects.

This first book is thrilling! I greatly enjoyed the camaraderie between the authors (millennials to retirees) gathering together to map out the clues, notes, and news articles relying on their individual strengths. And what a great character twist having Blackbeard the parrot in a clue-revealing role! He provided such clues in a puzzling manner…ya know, bird speak.

I was racking my brain trying to uncover what all the squawking could mean. The mystery brilliantly wove together the two murder investigations: the eleven-year old cold case dubbed the Friday the Thirteenth Massacre and the current suspicious death of one of the survivors. The links had me looking closely at the characters until…”Oh, no! I didn’t see that coming!” end.

First Case is the debut novel in Kathi Daley’s A Writer’s Retreat Southern Mystery series and it’s an awesome and delightful read. Ms. Daley’s writing style flows smoothly and she provides great background information about the characters and town. The characters are well rounded and affable and the mystery well plotted. As with all her books, Ms. Daley has provided readers with a clean, fun read, caring and compassionate characters, and an intriguing mystery to try to solve. I highly recommend this book to anyone who enjoys reading well-crafted cozy mysteries.

Until recently, Jillian ‘Jill’ Hanford was a New York newspaper reporter but she recently experienced a professional setback so when her half-brother, Garrett Hanson, suffered a stroke and needed help with his resort on Gull Island, a small island off the South Carolina coast, she agreed to oversee scheduled renovations and decided to turn the resort into a writers’ retreat.

Turning the resort into a writers’ retreat looks like a winner; she currently has five authors in residence and a waiting list that is filling up quickly. The authors currently residing at the resort are George Baxter (traditional whodunit mysteries), Clara Kline (fantasy and paranormal mysteries and self-proclaimed psychic), Alex Cole (science fiction), Victoria Vance (steamy romance and Jill’s best friend), and Brit Baxter (unpublished but wants to pursue her dream of writing).

In addition to being a sounding board for each other, the group also works together to try to solve real life mysteries. When Katrina Pomeroy’s body is discovered at the foot of an old pier, it’s unknown how she died. Katrina was one of five survivors of the unsolved Friday the 13th Massacre, which occurred on Waverly Island exactly eleven years from the date of her death.

Jill would like to write a human-interest story about Katrina’s life and include the identity of the person responsible for her death. Jackson ‘Jack’ Jones is a well-known author who recently moved to the island and fulfilled his lifelong dream of writing for a newspaper by purchasing the Gull Island News. Jack will be writing an article for his newspaper and he and Jill join forces to try to solve the mystery surrounding Katrina’s death, but in order to do that, they need to go back and try to figure out what happened eleven years ago.

Deputy Rick Savage isn’t happy about Jill and Jack’s investigation but Jill convinces him they should all share information and he reluctantly agrees as long as everything they discuss is kept off the record. With the help of the retreat authors, Jack, and investigating clues provided by Garrett’s talkative parrot, Blackbeard, Jill uncovers shocking secrets.