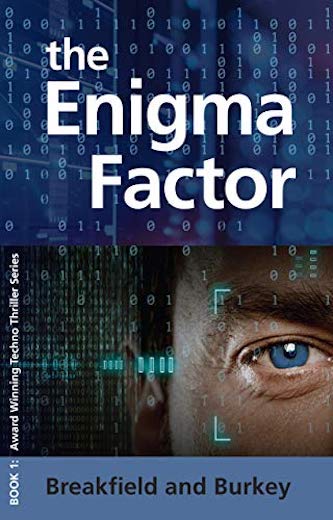 The authors combine a blistering pace and fleshed-out characters with startling aplomb, ensnaring listeners, and pulling them along the dark path of the book.

Jacob Michaels, computer network security-tester extraordinaire, tries to settle into a quiet life of work to polish his technology skills after the death of his mother.

MYSTERY/TECHNO THRILLER:  Jacob Michaels is an expert programmer who protects companies from cyber criminals wishing to exploit them. When he finds himself targeted by a hacker collective who tries to blackmail him into helping with their dark scheme, he embarks on a mission with his best friend Buzz, and skilled encryptionist Petra to foil the plot and save the day.  As he gets closer to the truth, he finds that the distinction between good guys and bad guys becomes increasingly hard to define.

Breakfield and Burkey’s joint fictional debut is certainly done with style – after a somewhat slow start, this tense techno-thriller keeps the listener on the seat’s edge, as the roller coaster ride of twists and turns roars into the story’s conclusion with smoke billowing from the brakes! The authors combine a blistering pace and fleshed-out characters with startling aplomb, ensnaring listeners, and pulling them along the dark path of the book.

Steven Jay Cohen is rather a legend in the audiobook world, and his performance here certainly lives up to the hype.  His warm, engaging vocals and meticulous delivery seem to glide effortlessly across the story, drawing the listener in and holding them there through each blistering twist and hairpin turn.  The audio production is professional and highly polished, with nary a background noise or misspeaks to be found.

For fans of action, adventure, and intrigue with a dash of romance, this is the book to listen to!  Find a cozy sofa and hang on tight while careening through this tale, and be prepared for a satisfying audiobook.

We return to where it all began in the second edition of The Enigma Factor by Charles Breakfield and Roxanne Burkey. We revisit the world that was established some time ago to refresh our minds on how things all started for our motley crew.

While Breakfield and Burkey are working on their eleventh book in the series, including the CATS spin-offs, it’s easy to forget how this fantastic world began. How did Jacob get caught up in this world in the first place? This book gently and lovingly reminds us of how our
hero became the man he is. This is Jacob’s beginning, the beginning of the world of Enigma.

Long-time fans of the series will be overjoyed with the second edition. Any issues that were prevalent in the first edition are eradicated from this second run. Breakfield and Burkey are two talented writers, talented enough that readers won’t be able to distinguish who wrote which part of the tale.

When you have two individuals working on one written work, it is often difficult to create one smooth voice, but
it’s been done here. This is where it all began: this is where readers who are new to the series will get devoured by the excellent writing and character development. Newbies are in for the long haul.

With such a large cast of characters and one that just keeps growing as the series progresses, it’s admirable how the authors keep everyone in line.

This first book isn’t as character-heavy as later installments, but there are quite a few people and organizations to remember. The authors are consistent and have been careful about their portrayals. There is a lot of multiculturalism in these pages and the authors respectfully portray characters of different nationalities. With a handy glossary at the back of the book, even those who don’t know anything about computers can enjoy this book without feeling like they are missing something.

With a cast of wonderful characters, just the right amount of suspense and cyber-subterfuge, readers will love The Enigma Factor by Charles Breakfield and Roxanne Burkey. This second edition is for both newcomers to the series and for those who have been following its development closely.

Come back to where it all began and allow yourself to get sucked into this world. No reader will regret it, and you just might find yourself enjoying a whole new series.

Please click HERE to find The Enigma Factor on Amazon.