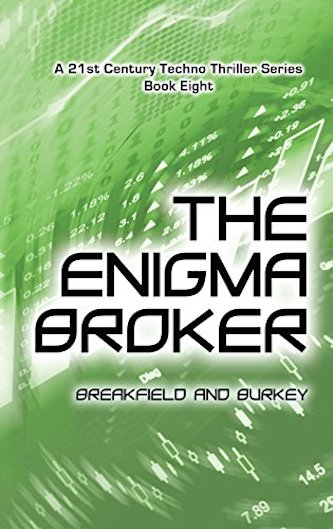 The intense nature of the crimes in this tale and the quick actions to circumvent them will leave readers breathless and waiting for more.

Inexplicable drops in world markets for oil, copper, coal, and other commodities are destabilizing nations to the point of economic collapse. A conspicuous increase in production numbers for primary oil producing companies results in a call for help from governments and a large oil distributor.

The R-Group quietly engages amid fears that further drops in value could devastate civilization. Jacob Michaels is called directly by ePetro’s Mike Patrick, CEO of the multinational oil broker, due to some prior data and network security he had performed. The early investigation into the production number manipulation by Jacob, with his coworker and lover, Petra, suggests the problem is a result of hacking by a Dark Matter Organization.

Where is the DMO operating, who is at the helm driving commodity prices down, and how does the search evolve into a perilous hunt which puts Jacob, Petra, and other members of R-Group directly into the path of mortal danger!?
Hidden leadership of the DMO is fierce and lethal when it comes to protecting the organization and its plans of global commodities market control. The enforcers of this agenda are quick to execute orders without question as soon as they are issued.

R-Group’s advantage of leading technology resources, brilliant technologists, and years of experience may not be enough to locate the genius source bent on commodity market domination. Has cyber good versus evil from the dark net become a challenge they simply cannot win?

The Enigma Broker, by Breakfield and Burkey, the award-winning authors of The Enigma Series, takes readers on a journey from the affluence of London to the extreme poverty of Panama and everywhere in between. The layers of planning and conspiracy by the cruel DMO supply suspense and intrigue to the very end.

By Writers and Authors

The Enigma Broker, the eighth book in The Enigma Series, takes readers on a thrilling journey into a dangerous digital underworld while raising troubling questions about our dependence on technology and our current obsession with social media avenues for communication. All around the world, commodity prices are plummeting, and nobody asks why.

The steep drop in the markets for oil, copper, coal, and other commodities threatens to destabilize nations and bring them to the verge of economic collapse. Amid fears that further drops in value could devastate civilization, the R-Group quietly engages. The R-Group was formed during World War II. After delivering the Enigma machine to the British, they used their copy of the device to safeguard wealth and property from the Nazis.

Today they use information-gathering and security capabilities to protect us from cyber-attacks. The R-Group uses their respected position with private and public entities to ensure the right information is available for those responsible to make informed decisions. Jacob and Petra begin investigating the free fall in oil prices and soon discover disturbing clues that may implicate a “dark matter organization”—a shady organization that leaves no digital footprint behind.

Meanwhile, ICABOD, the group’s supercomputer, teams up with government investigators to identify potential suspects. Quip and EZ also apply their special talents assiduously to the case but don’t let their work interfere with their blossoming relationship.

I have to tell you I have found a new favorite author, Charles V Breakfield and Roxanne E Burkey have put together The Enigma Series packed with thrills and intrigue.

I’m a big fan of conspiracy novels and books that make you think reading The Engima Broker, I felt as if I was part of the team, helping the uncover clues, a few times my hunches were right and other I was thrown a Technological curveball.

Probably because I work on computers I loved the run-ins with the Sinister genius, the author was able to skillfully make the character’s relatable and adds touches of romance throughout the book.

The Technology basis of the book was spot on. This is a Techno Thriller series is here to stay, if you have not grabbed a copy of The Enigma Series don’t wait another day, this is a fast pace read as you want to turn the page to see what is happening next.

Who doesn’t love a good cyber-crime story peppered with intrigue and action? An excellent addition to that genre is none other than The Enigma Broker by Breakfield and Burkey. The current entry in a series that has chronicled an alternate future, this book is filled with thrills and chills.

While the cast of characters is quite large, so much so that a single protagonist cannot be identified, the villains themselves aren’t quite so numerous, but their fearful plots are devious and cruel. It is not necessary to read previous installments in the chronicles, but it would undoubtedly be helpful at providing external context to the characters and their relationships.

The intense nature of the crimes in this tale and the quick actions to circumvent them will leave readers breathless and waiting for more. There is truly very little to be disappointed with in this engaging tale.

The formatting and layout of the book are fantastic. The short-ish chapters make the story easy to read and take a break from if necessary. Some of the technical terms may go over the heads of readers and the authors have taken steps to address these concerns at the back of the book.

You don’t have to be a computer genius to be able to understand what is happening, but it does not hurt to have some basic technical knowledge beyond pressing the power button on a computer. If you fall into the latter part, you may find yourself slightly lost while trying to follow those pieces of the story. The rest of the book more than makes up for that, however.

The relationships with the characters have some carry over from previous installments in this series. That can be difficult when you come into the series out of order, but it is dealt with easily by our authors. They give enough backstory and enough context that the present relationships are easily understood.

As there seems to be a focus on romance and the development of these said relationships, this is crucial to get across to your readers who do not have the luxury of that backstory. The humor and action sequences are well thought out and planned accordingly. Nothing feels unnecessary or over the top. Everything has a place and the characters comply with their given roles.

A techno-thriller with a vast cast of characters can seem like more than the average reader is willing to take on. However, The Enigma Broker by Breakfield and Burkey is not one to be passed over. Any reader can tell that the research and partnership for this book were executed expertly.

There is no clashing in the story where two authors disagree. Instead, this is a seamless book that flows as if it were written by one person. The romance and the action combine to give this book an added flair. Any reader would get a great read out of this.

Please click HERE to find The Enigma Broker on Amazon.