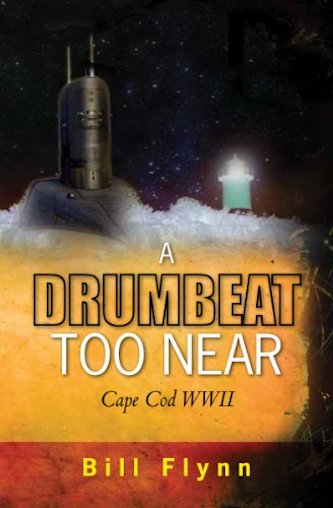 Bill Flynn deftly weaves his stories of U.S.families and Germans dealing with the horrors of war and duty.

Junie, Iggy, and Allie are teenagers in East Bay on Cape Cod during WW ll in 1942.

The atmosphere of war hangs over that seaside town like a winter fog. Its men go off to join the fight and the women left behind to wait for their return while trying to stay faithful.

The three boys do their part by patrolling the beach as volunteers.

One is captained by Karl Heineke who is not enthralled by the Nazi regime and is in love with a French woman.

When Heineke’s U-boat launches two spies one of the boys on beach patrol is there to confront them.

By James A. Anderson:

It is a World War Two tale — a mixture of fact and fiction, but a very interesting read. I liked very much how the author juxtaposes two parallel stories of three teenage boys patrolling the beaches of Cape Cod and the captain and crew of a German U-boat off the shores of Massachusetts sinking ships headed to England with food and war supplies.

The author does an excellent job of bringing his characters to life, including the Germans. He portrays them with humanity doing a nasty job for their country and also points out that not all Germans were Nazis.

In fact, some in the military were opposed to Hitler and his policies. Bill Flynn gives an accurate and sympathetic picture of Admiral Karl Donitz, commander of the U-boat fleet, who sometimes opposed his Nazi masters where the welfare of his men was concerned.

This is not a Young Adult novel per se, but it is suitable reading for teenagers who can learn something about the war.

Bill Flynn deftly weaves his stories of U.S.families and Germans dealing with the horrors of war and duty.

An added bonus and a very nice touch is an Appendix with some of the food recipes used by the book’s principal characters. You can try out the recipes for Gina Posada’s Baked Stuffed Quahogs, Barbara’s recipe for Wiener Schniztel (which I can personally attest is excellent),

I can highly recommend this book. Amazon Review

A wonderfully written story that is based on two main plots taking place at the onset of WWII. One is centered around three adolescent boys growing up on Cape Cod, the other follows the career of a German U-Boat captain. Intricately woven plots, fantastic character development, and a keen sense of those historical times make this book a winner from the word go.

The author takes us into the minds of all the characters…the kids, their families, the disillusioned U-boat captain, and his crew. Refreshing too, that the German military personnel are presented as human beings, not monsters, expressing their own reservations and emotions about the war as well.

The book shows that war, while inherently evil, and despised by most, is sometimes necessary and unavoidable. On the domestic side, the social implications of infidelity are also present here, and once again the author perfectly conveys the kids’ mindsets in how they deal with those issues.

Overall, this book is not only a coming of age story, but one of friendship, hardship, patriotism, and sacrifice. Absolutely loved this book.

When three adolescent boys turn their beach hangout into an observation post for enemy activities on the Massachusetts coast during World War Two, their careful watching results in preventing attacks on the citizens of their community.
Beginning with a German submarine captain who does not share his countrymen’s enthusiasm for Nazi propaganda, Bill Flynn spins a tale of espionage and intrigue seen through the eyes of Allie, Junie, and Iggie.
This is a story of what was and not what might have been; an interesting take on submarine warfare, civilian innocence, and a good attempt to humanize the participants of the war.
The book is based on true events; U-boats torpedoing ships laden with supplies for the European war zones, encounters between fishing boats and those same submarines, code-breaking activities of the UK, and saboteurs coming ashore in the Northeastern United States.
While the three boys carefully patrol their small coast, relationships between adults take on mildly nefarious tones.
This coming-of- age-in-the-time-of-war novel held my attention throughout.
Please click HERE to find A Drumbeat Too Near on Amazon.