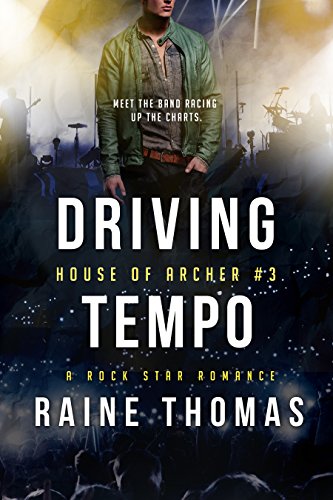 A rock band. A reality show. A life swerving out of control.

The House of Archer cameras continue to roll, and Lily and Archer feel the pressure to perform. As the show’s stars and media’s newest darlings, their love life is bright in the public’s eye. But what should be the best time of their lives has Lily feeling like she’s an inch away from a head-on collision.

Between the never-ending cameras and a relationship moving forward at top speed, she barely recognizes her life anymore. All she wants is to pursue her writing career and plan her future with the man she loves. With complicated roadblocks popping up at every turn, neither seems possible.

Time to call in reinforcements.

Recruiting the help of her sister, Rosemary, seems like the answer to Lily’s problems…until things between Rosemary and The Void’s spoken-for sound specialist, Sage Strickland, start to heat up. Now there’s one more teetering band relationship for Lily to balance in the media along with her own. One misstep could not only destroy The Void’s recent success but end the only career she has.

Once Lily, Archer, and the band transition from touring back to everyday life in L.A., they’ll have to learn how to navigate the twists and turns of their newfound fame. After all, the summer tour may be coming to an end, but the drama is just beginning.

Driving Tempo is the third book in the House of Archer series and has a Happily For Now ending. Each book continues Lily and Archer’s story and shares the stories of the other members of The Void. Enjoy your reading journey and rock on!

Lily and Archer have been through a lot during the tour of a lifetime. Lily went from hating the media to being the biggest news in the media. She was shy and hid from the camera to now knowing how to act just the right way and say the right things to make sure it is portrayed the way she wants to the public eye.

When Rosemary, her older sister, agrees to be her wedding planner and plan the wedding of the year in 2 months, Lily is relieved. She’s glad that she has the professional help to get everything figured out, while she can also do the 5 other things in life she has to do.

Rosemary didn’t know what hit her when she got knocked down before one of The Void’s concerts. Turns out, it was Sage, the music mixer in the band. And once she really looked at him, Rosemary wasn’t too upset being knocked down to the ground.

And it turns out that Rosemary and Sage have more than just their unique names in common. With insomnia both of their friends, they typically meet most nights and just talk about whatever the mood strikes them at the time.

So…if you’ve read my reviews for the first two books in this series, you saw me declare my undying love for Keith in my review for the previous book. I still hold true to this but, I have to say that Sage gives him a run for his money. Sage is sweet and nerdy in the very best way. And he wears his heart on his sleeve…a guy who wants true love and is willing to wait it out even when it seems impossible.

Now, in truth, I spent a fair bit of this book frustrated with him, urging him to see what was right in front of him. But, at the same time, I was begrudgingly amazed by his commitment to making the right decision. Thankfully, he heard my pleas and finally grabbed his forever.

And, speaking of that, Rosemary is a great character. After a very stressful beginning to her story, she settles in and becomes a member of the family. Traveling with the band, helping Lily plan her wedding to Archer, and battling her feelings for Sage. These two had great chemistry and I enjoyed their quiet moments together. Totally swoony!!

Of course, if you’ve ever read a Raine Thomas book you know that her stories always feel like you’re looking in on a family, meaning that characters are never forgotten. Once again, I was able to see what was going on with Lily and Archer, and Keither and Sydney. The other members of the Void and their significant others play a large role in this story, as do the members of the other band on the tour…and I love that. In this book, we get a resolution to an ongoing mystery and I was quite satisfied with the resolution of that storyline. It both made sense to me and also provided a bit of a surprise.

Ultimately, Raine Thomas books have something in common regardless of whether they’re fantasy or contemporary…there are always well-rounded characters and deep emotions. Add to that wonderful writing and you’ve got yourself a book you can immerse yourself in! If you haven’t read a book by this great author yet, do yourself a favor and get one today!