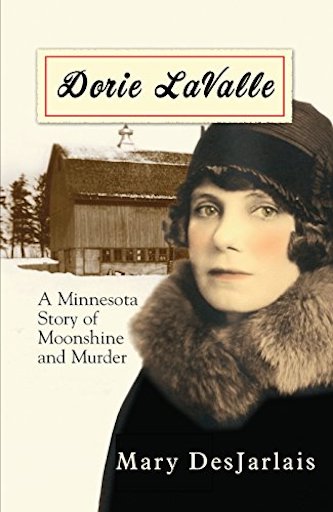 Is Dorie a victim with the intelligence to survive or is she better suited for the Mafia?

Born on the first day of 1900, Dorie finds herself at odds with the world and out of options. Married to Louie LaValle, a local man with an inherited farm but not the talent or stamina to run it, Dorie is anchored in poverty, childless and tied to someone she doesn’t love.

Prohibition and desperation inspire her to make and sell moonshine to the men in town. Soon she makes more money than she ever dreamed possible.

To expand production, she enlists free-wheeling Victor, who builds a secret distillery in the woods.

When Victor appears at her door with a gunshot wound, describing an ambush at the still, it’s up to Dorie to protect her future — and Victor — against angry neighbors, a zealous sheriff and the Chicago mob.

The title of the book holds true. Against a cold, numbing, stark winter backdrop, Dorie circumvents her life around a dim-witted husband, an enamored Scandinavian hired hand, an illegal moonshine business…. and not by her design- an accomplice in murder.

Author Mary DesJarlais skillfully weaves in a beautiful, complicated, woman caught in ugly circumstances. DesJarlais pushes the reader to decide: Is Dorie a victim with the intelligence to survive or is she better suited for the Mafia?

Clearly, the “brains” of the operation -it was a compelling read to see how many knives could she juggle. Highly recommended, kudos to Mary DesJarlais! As promised in the title-she delivers!

LOVE LOVE LOVE this new writer. Genealogical fiction is a new trend and Mary did a great job. Taking a person in her family history and making up a story surrounding them was genius but the writing and word usage were like having your cake and eating it too.

She follows a moonshine woman through tragedy, murder, and lost love. Tells the story very artfully from a total character voice reversal -it was odd- but delightful. The voice of the book changed from the main character halfway through the book and we really got the inside story from two characters.

The descriptors of living in Minnesota are so well done. I cannot wait to hear more from this writer. A great first-time performance and book clubs will love it.

Mary DesJarlais makes her debut as a novelist with this tale of Prohibition-era Minnesota, so you might think of her as a sapling in the field of historical fiction.

But in Dorie LaValle, she skillfully avoids a trap that has ensnared the work of many full-grown Sequoias of the realm — the temptation to bury a good story under an avalanche of research the narrative doesn’t need. DesJarlais, of St. Paul, keeps her novel from turning into a historical tract by focusing on the physical and emotional dramas of her title character, inspired by a great-aunt who sold moonshine in Osseo during the 1920s.

Dorie LaValle has married a hapless potato farmer who lacks the energy and inclination to support her. And she fantasizes about owning a store stocked with silk hosiery and fragrant soaps, though not in tiny Osseo: “Not where women made do by fashioning dresses out of flour sacks and wore threadbare, darned undergarments. No, it would have to be in a big, fine city like Minneapolis where the women would know the importance of surrounding themselves with fine things.”

Lacking the money to open a shop, Dorie makes and sells moonshine with the help of a partner, Victor Volk, who has built a hidden distillery amid the pines.

She runs a thriving business out of her kitchen until Victor suffers a gunshot wound inflicted by an intruder at the still, where a body soon turns up. As residents of Osseo begin to question what happened, she runs afoul of her neighbors, the sheriff and a gangster from Chicago.

This plot might seem to set up a white-knuckle thriller, but Dorie LaValle evolves into something quieter and closer to a love story. As Dorie gets unexpected support from another wife, it also becomes a celebration of female friendship.

An implicit theme of the book is that if people associate the Roaring ’20s with flappers and jazz clubs, many women led far less glamorous lives. A friend tells Dorie: “The men in my life never looked at me as something of value. They only saw me as something pretty to touch.”