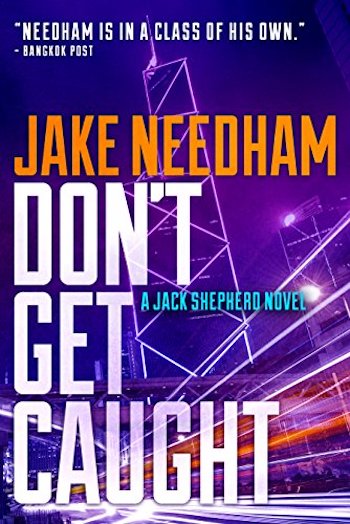 If you like your modern crime novels pacy, with more twists and turns than a curly noodle, start reading.

JACK SHEPHERD IS the kind of lawyer people call a troubleshooter. At least that’s what they call him when they’re being polite. Shepherd is the guy people go to when they have a problem too ugly to tell anyone else about. He locates the trouble, and then he shoots it. Neat, huh? If life were only that simple…

A little money is missing from the Malaysian Development Fund, a sovereign wealth fund run by the Malaysian government. How little? Oh, a billion dollars or so, give or take. Shepherd is tiptoeing around Hong Kong’s financial back alleys looking for Malaysia’s missing money when an old friend from Bangkok dumps a much bigger problem in his lap.

A military coup has just swept over Thailand and the Thai army is holding Thailand’s first female prime minister under house arrest. Her popularity is a major threat to army rule and that’s why things are about to get messy. The army is going to hold a show trial, convict her of corruption, and send her to prison. Then, when she’s behind bars, they’re going to kill her. The only way to save her life is to get her out of Thailand before the trial starts, and her friends need some big-time help to pull that off.

Shepherd once lived in Thailand. There was a time when he loved the place, then things went sour and he’s sworn he’ll never go back. But the former prime minister whose life is in danger is a woman with whom Shepherd once had a relationship – well, sort of – and Shepherd is loyal to his friends. He’s also a sucker for a smart, good-looking woman, but of course, that has nothing at all to do with it. Whatever the real reason, Shepherd can feel it happening. Thailand is reeling him right back in no matter how hard he struggles to stay away.

Okay, he decides, how hard can it be? Sneak into Thailand, track down Malaysia’s missing money, grab his old friend right out from under the nose of the entire Thai army, and keep her hidden and alive long enough to get them both out of Thailand.

A piece of cake for the troubleshooter, huh?

Don’t Get Caught is the latest novel in this Jack Shepherd series, and I think I’m a little in love with Jack – he’s a smart, cynical, self-deprecating, laconic lawyer and somewhat reluctant PI who inevitably gets himself involved in helping his friends in complex legal, financial or political situations.

Novel #5 in this series sees Jack, now living in Hong Kong, tasked with finding a missing few billion dollars, which, against his better judgment, takes him back to Thailand. Readers following Jack will know his last exit from Thailand wasn’t one that would make re-entry simple or un-noticed. But against his better judgement, he’s soon back in Bangkok, and that’s when the fun starts – Jack’s a sucker for a beautiful woman: Kate Srisophon, Thailand’s ex-first female prime minister, who has been arrested and is due to stand trial, the outcome of which will almost certainly be conviction and jail.

She’s not that convinced she’s in danger. Can Jack get her out of Thailand before that happens? And can he chase down those missing billions in the meantime? Does Jack finally have ‘his moment’ with Kate?
For readers familiar with Thailand and Hong Kong, Jake’s cultural perception of Asia and its politics, geography, history, values, customs, and his ability to flawlessly engage the reader with the people and places gives his books a delightfully gritty reality.

Jake takes you to today’s Bangkok and Hong Kong – you can hear the traffic, taste the smog and feel the steamy heat. The tension in the air is palpable. The dialogue is witty and clever – so many priceless throw-away one-liners, and totally believable.

If you like your modern crime novels pacy, with more twists and turns than a curly noodle, start reading. Just when you think you know how this will all end, there’s an unexpected but very satisfying conclusion.

Knee deep in a case involving a major Malaysian money heist, Jack Shepherd is called back to a Thailand of heightened political turmoil and danger that few would’ve thought could exist in that once peaceful land. Knowing that capture will bring certain torture and death, Jack remains determined to rescue the one person he believes could give Thailand a second chance.

Thailand’s new viewpoint has undergone a dramatic change, and every twist and turn of today’s mind set and intrigue must be reassessed if Jack is to be successful in his attempt to rescue and conceal his once more-than-friend, the lady prime minister,

Finding the missing money of Malaysia still hangs over Jack’s head, and if there’s one thing that always holds true in the Far East, it’s the old Chinese saying, “No money, no life.”

Jake Needham ‘knows’ and understands the Far East in a way that is uncanny. There is a ‘way of thinking’ that very few authors not born and raised there are able to capture, much less relay to their readers. Needham has a gift of envisioning, understanding and writing about the Far East that simply makes him a master of his craft.

Please click HERE to find Don’t Get Caught on Amazon.