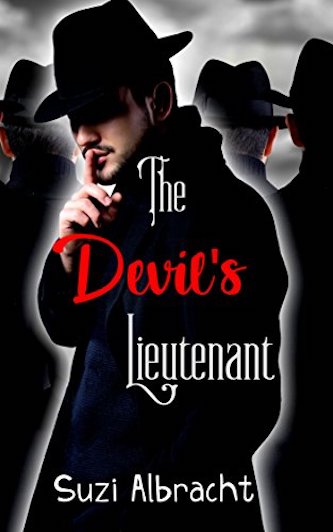 Suzi Albracht weaves a tale of evil horror that made my skin crawl.

A young police officer, Jake Holyfield, and his friends catch the eye of Dimitry Ivanovitch, the Devil’s right-hand man. Promoted to Homicide Detective, Jake catches the case of a lifetime. But it comes with complications.

The scene has no body, no DNA, nothing except a puddle of blood, human fat, and a few bones. An angel comes to him at the scene and gives him a small box. She tells him that someday soon, he’ll need what is inside.

Meanwhile, Ivanovitch determines that he’s going to recruit Jake to be his successor. Being a godly man, Jake refuses. Now all bets are off. Ivanovitch ratchets up the pressure while Jake continues to work his cases, refusing to take the Devil’s assistance.

Help comes in the form of Ivanovitch’s estranged son and Marybeth, the angel.

After reading and enjoying Albracht’s Scorn Kills, I knew what was in store when I began reading this novel. I wasn’t let down. In fact, after the first few pages, I was convinced the author had taken this tale of horror to an even greater level.

Like any good novel, horror or not, it’s the well-written characters that drive the story. In this department, Albracht didn’t skimp: Jake Holyfield and his pregnant wife, Caroline; his brother Bobby and friend Max – the good guys – pitted against evil in the form of Carl and Dimitry Ivanovich.

Quite simply, the bad guys want the good guys on their team, by whatever means. And they do have interesting means. But this story is also about the frailty of the human condition.

What moral price would someone pay for unlimited money, youth, or the woman of their dreams? This is a fast-paced read, with unexpected twists and turns, leading to a well-done ending.

I definitely want to read Albracht’s next book.

In The Devil’s Lieutenant, Suzi Albracht weaves a tale of evil horror that made my skin crawl. With characters that jump off the page, I was drawn into the story, following Jake Holyfield as he battles the malevolent forces that seek to destroy those he loves. In a story where good looks bad and bad looks good and shockers lay in almost every chapter, I couldn’t put the book down.

Starting with a horrifying and very gruesome killing Jake sets out investigating similar crimes. Meeting a strange and ethereal young girl at that first crime scene, he is given a tool that will come in handy down the line.

With dead bodies that have been dissolved into “globs” of fat and blood, the story unwinds in growing tension. Interwoven in the story is the relationship between Jake and Bobby Holyfield and their childhood friend Max Wilson.

Along with the mysterious Mikael Ruskoff, Jake battles the minions of the Devil himself. Filling out the story are the personal relationships of the characters; important relationships that carry the story forward neatly. Always terrifying and often heart-breaking,

The Devil’s Lieutenant is a must read for horror fans.

Since this is book one of a collection I can hope my favorite characters will continue their war against evil in future editions.

Please click HERE to find The Devil’s Lieutenant on Amazon.