Daily Review: Delaney: And So It Begins by Owen Mullen 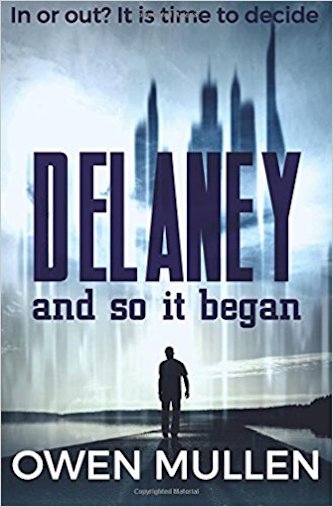 A serial killer is targeting children appearing in pageants, whisking them away from under their parents’ noses.

Brave of a resident of Scotland and the Greek Islands to write a police procedural set in one of America’s most iconic cities, one with a strong and unique culture, history, and personality. Still, he’s chosen New Orleans for the first in his series featuring protagonist Vincent Delaney—former NOPD detective, now a private investigator.

For the most part, the character of the Big Easy comes through in the details Mullen chooses to provide, though the deep trauma of Hurricane Katrina receives only a single mention. There’s maybe too little attention to food and the weather, some nice references to music (Delaney plays in a band), and directly related to the story, a reopening of the old wounds of NOPD corruption that have helped poison race relations in the city.

Delaney has three—make that four—issues on his hands. First is a background hazard in the form of Julian Boutte, a mentally deranged African American man whose brother Delaney killed a decade back when he was still an NOPD detective. Boutte has escaped from prison, and there’s no question that he plans to kill Delaney.

A group of African American small business people from the North Le Moyne area are having to pay protection money they can ill afford and seek Delaney’s help.

The third problem, and the one that takes up most of the book’s plot deals with a bizarre phenomenon of American life, the child beauty/talent pageant. Across the southern states, children who participate in these pageants are being murdered. One of the victims is a five-year-old boy, killed only minutes after winning with a memorable Charlie Chaplin imitation— the inspiration for the book’s striking cover.

The FBI leads the investigation, but there are some 5000 such pageants in the US every year, and they cannot begin to cover them all, so bring in local help. Delaney’s niece is a pageant participant, which gives him an ideal opportunity to meet organizers, participants, obsessed parents, and, possibly, a killer.

While the culprit in Mullen’s tale is more obvious early on than the elusive true-life murderer of JonBenet Ramsey, still at large after twenty-one years, the child beauty pageant world is ripe for exploration. Mullen does a nice job highlighting the different motivations of several sets of parents and their young daughters.

If all these work challenges weren’t sufficient, Delaney has woman troubles, though he has a mostly good relationship with his sister and brother-in-law, as well as several friends still on the force. Mullen describes the interaction between Delaney and his family and friends warmly, and they feel real.

There are more books in the Delaney series to come, and especially if you like the New Orleans setting (I miss Treme!), they may just put the chickory in your coffee.

A serial killer is targeting children appearing in pageants, whisking them away from under their parents’ noses. His niece is also entering the pageants and the New Orleans Police Department want Delaney to go undercover, without telling his sister and her family. Omitting the truth doesn’t sit well with Delaney but the perpetrator is running rings around the police. There don’t appear to be any leads to follow and no clues left at the crime scenes.

Meanwhile Julian Boutte, in a safe house guarded by FBI agents after making a deal to give evidence in a trial, escapes after shooting the agents. Boutte wants revenge. Delaney killed his brother when the two of them abducted, mutilated and murdered a female victim. Boutte managed to escape and has been under the radar for the past several years. Now he’s back and on the loose again.

And as if Delaney didn’t have enough going on, payments are being extorted from the local shopkeeping community, supposedly for protection, and the shopkeepers are asking for Delaney’s help.

There’s a lot going on in this book, in a good way, which only served to keep me riveted to my kindle. The separate threads and flashbacks were woven together seamlessly so the storyline was easy to follow. I warmed to Delaney, and his dry humour, almost immediately. He’s not the angst-ridden detective of so many novels, however, he has had his share of problems.

With his high moral code, leaving the police force when he became disillusioned and disinclined to carry on under the circumstances, was his only option, as far as he saw it. He does what he feels is right regardless of what others think.

I’m loving Delaney’s dog, Lowell, his music appreciation, sensitivity to situations and how he reacts when Delaney talks to him. Delaney is a character I’d be happy to follow. He’s laid back and quirky with lots of character, whether it’s playing the harmonica while riding his bike with Lowell running alongside, or playing the harp in his band. All this adds a good contrast to the seriousness of the storyline.

The setting is evocative. New Orleans is depicted so well and gives a real sense of place, even to someone who has never been. The story’s main focus is the children’s pageants being held across the country. It was an eye-opener and although these types of competitions are no doubt widespread, it’s still hard to believe that parents would voluntarily subject young children to this kind of aggressive pressure.

A fast-paced, well-written thriller and, unusually for me, I did get a feeling when the perpetrator appeared in the narrative. Not that it spoiled the story because I second guessed myself several times. I enjoyed Owen Mullen’s writing style and will check out his other books. I hope to see more of Delaney in the future.

Please click HERE to find Delaney: And So It Begins on Amazon.