Daily Review: Death of a Wolfman by Susan Boles 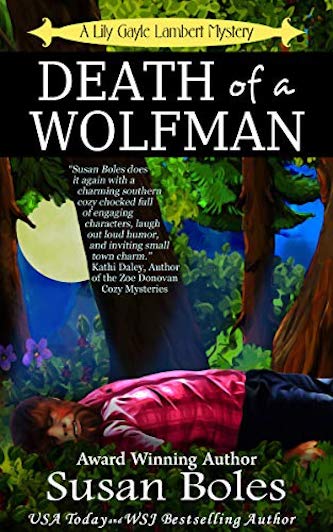 Quicker than she can stitch together the threads of a genealogy project she’s just signed on to research, Lily Gayle Lambert finds herself embroiled in investigating the mysterious Halloween night murder of a stranger who suffers from ‘wolfman syndrome’.

And, when a member of a prominent family turns up dead soon after the ‘Wolfman’, Lily Gayle must find the link between the two and solve the mystery before her investigation makes her the next target.

With the help of her lifelong best friend, Dixie, and town busybody, Miss Edna, she pieces together the clues leading to a conclusion that shocks the entire town.

Death of a Wolfman by Susan Boles is the first in this cozy series and it perfectly established the cozy southern town and the characters.

Lily Gayle is sassy, spunky, nosy and independent. She has moved back to her hometown after her husband died. She has an etsy shop for costumes and she does genealogy research for clients. The town snoop, Miss Edna, her best friend, Dixie, and her cousin, Ben, were wonderful secondary characters.

I loved the wolfman syndrome brought up in the book. I, too, have only heard about from watching CSI! The plot is quickly paced and I had an inkling early on who the “Wolfman” was early in the book but the reveal answered all the questions that I hadn’t been able to figure out on my own.

Plenty of twists, humor, friendships, and love filled this cozy mystery. I look forward to reading the next one in this series.

By Susan Sewell for Readers’ Favorite

Her meddling into others’ affairs is a nuisance to her cousin, Ben Carter, the Sheriff of Mercy, Mississippi. On Halloween, Ben is called away from their dinner to investigate an anonymous 911 call. The caller reports there is a dead wolfman in the woods.

Mercy is a small town where everybody knows everybody else’s business. A furry man would not have gone unnoticed. Thinking it is a Halloween prank, Ben takes Lily Gayle with him. They are astounded to find a dead wolfman. To Ben’s aggravation, Lily Gayle starts butting into his murder investigation and putting herself in danger.

Despite Ben’s warning to leave the investigating to him, Lily Gayle continues snooping around. Her meddling gets her into trouble and another murder is committed. After Ben puts her under house arrest, Lily Gayle teams up with Miss Edna and her best friend, Dixie. Will they find the murderer before he finds Lily Gayle?

Death of a Wolfman was truly a fun book to read. From the first sentence, I was hooked and had trouble putting it down to make dinner. I love the irascible Lily Gayle and her inherent nosiness that frequently gets her into trouble.

The characters were lifelike and loveable, especially the elderly Miss Edna, who could have been Lily Gayle’s meddlesome twin. Death of a Wolfman is an entertaining and enjoyable read and I recommend it to those who love a good cozy mystery.

Please click HERE to find Death of a Wolfman on Amazon.