Daily Review: Death Is the New Black by Dominic Piper 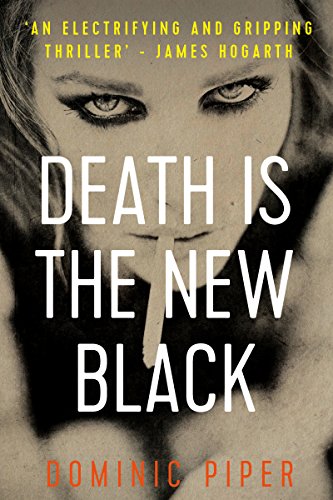 Beautiful, ambitious and talented, top fashion designer Sara Holt seems to have the world at her feet. But recently, her life has been turned upside down. She’s been on the receiving end of a vicious and frightening campaign of harassment.

More sinister still, someone has been breaking into her flat, sometimes when she’s in bed asleep. Perversely, they don’t steal anything. The police are skeptical and can find no evidence of a break-in.

No one witnesses the harassment. No one believes her. Is it all in her mind?

Then she hires enigmatic private investigator Daniel Beckett, and gradually the chilling truth begins to unfold.

I can NOT get enough of Dominic Piper and Daniel Beckett, a private investigator he so masterfully created. Piper’s easy going writing style and his amazing ability to let readers see the story through Beckett’s eyes to the point that you feel as if you there with him, solving cases, makes for a super entertaining and a really unique read.

If you enjoy mysteries/thrillers, this author and his work would be right up your alley. Addictive. Well written. Disturbing. Thrilling. Dominic Piper’s work brings to the table some of the best ingredients that make up the delicious dish that is Daniel Beckett series of novels.

If you are looking for a fast-paced thriller, I highly recommend Death is the New Black by Dominic Piper. This book features a lascivious sleuth, the fashion industry, sexy women, a high-speed chase, physical combat, dynamic characters, and lots of plot twist.

Dominic Piper superbly uses the first person to flesh out his main character. Within a few paragraphs, I start to understand Daniel Beckett, the thirty-something Private Detective. At first, I was put off with the way he sees women as sexual beings, but then I realized that he is appreciative of the female form and not derogatory. For some reason, women are attracted to Becket as much as he is to them…every man’s fantasy.

After the police fail to help her, Sara Holt hires Daniel Becket to investigate street-harassment and possible break-ins into her home. Then, the attacks escalate. Can Daniel Becket save Sara Holt? Will he be too distracted by the women who seem to fall all over him? Will his sassy retorts get him into difficult to get out of situations?

Daniel Becket is resourceful, but also lucky. He can be cold, calculating, and deliberate—never to be underestimated.

The sex and violence are suggestive, not graphic. If reading these make you uncomfortable, find another book. Otherwise, hold on to your hat: you’re in for a fast ride.

Tough, dark, and often sexed PI Beckett, London’s answer to Sam Spade is back and thrown hip-deep into the world of fashion, where the people may be catty, but are they capable of gas-lighting? Sara Holt is the client and she’s been the target of harassment and break-ins.

But there are no witnesses, nothing missing, no evidence. The police are snickering and rolling their eyes in doubt when Sara reaches out to Beckett and hires him. Did it really happen, or is the pressure getting to the new designer?
Like its predecessor, Death is the New Black, starts off dangerous and gets grim quickly.

The antagonist is nebulous, shadowy, and may be entirely fictitious. The streets are dark and the clues are few. The only bright spot is the client’s assistant Isolda, but with a name like that can tragedy be far behind?

For a few dollars, one can ride around on Beckett’s shoulder as he goes about London exploring the bright and the dark looking for clues and finding far more than he ever believed possible. It’s all there waiting for the reader, and worth every penny.