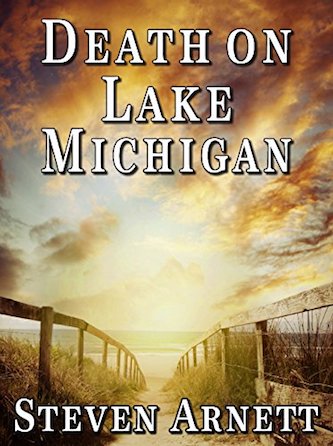 This mystery has the feel of bygone days populated by characters like Sam Spade and Philip Marlowe.

Mike O’Brien, once the crusading editor of the Michigan State News, now the assistant editor of the Gull Haven Observer, becomes obsessed with solving the murder of Rich Mallon, one of the most notorious and well-known summer citizens of Gull Haven—and finds love in the process.

This is a good book for mystery readers. The plot and the characters of Death on Lake Michigan are convincing enough to be real.

I like the author’s voice that is clear and consistent without being boring. My favorite character is the narrator, a small-town reporter.

Although investigating several murders, he remains lighthearted. He is never daunted as he proceeds with untangling the motive, opportunity, and means leading him to the perpetrator and the accomplices.

The unfolding of the plot is told from his point of view in the first person.

The story kept my interest throughout. I suggest reading Death on Lake Michigan

While set in 1973, this mystery has the feel of bygone days populated by characters like Sam Spade and Philip Marlowe.

Though the sleuth is in actuality a journalist, I could almost envision Bogie puffing on a cigarette as he hunts the elusive suspect in this baffling mystery.

The mystery surrounds the discovery of the body of Rich Mallon, which has washed up on the shores of Lake Michigan, in the idyllic town of Gull Haven. A young journalist named Mike O’Brien becomes obsessed with the case, and with the help of Lt. George Dirkman, he slowly puzzles through the mystery where the motive and suspects are not what they seem.

I enjoyed the 1st person narrative, where the reader only discovers and mulls over the evidence and clues right alongside Mike.

I was particularly impressed by the snappy dialogue and enjoyed the sometimes amusing and often perplexing exchanges between the characters.

Hopefully, this will turn into a series as I believe that Mike O’Brien would make one heck of a P.I. Enjoyable!

Lots of characters step onto the pages, but, the reader-turned-sleuth is able to hone in on the key players who may have murdered Rich Mallon, a drug dealer, whose body washed up on the shores of Lake Michigan.

The story is told in first-person narrative by Michael O’Brien, a reporter for the ‘Gull Haven Observer’. A determination to step it up beyond his typical general-interest scoops for a small-town newspaper of little consequence takes the reader into the mindset of an investigative reporter, as well as that of Lt. George Dirkman of the Lake County sheriff’s office, whom he runs things by.

The author’s easy-going writing style and realistic plot twists throughout the progression of the story to solve a murder, render this novel “crime fiction with conviction.”

Although there are elements of danger and threats, there’s no over-the-top drama. Just persistence in chiseling away at each tidbit of information painstakingly acquired from those reluctant to be forthcoming.

Also interesting, the author infuses the ‘70s in this novel—an era when phone booths still loomed large on the urban landscape. There are references to the Watergate hearing and “Tricky Dick”.

Whether or not you’re surprised in discovering who murdered Rich Mallon, Death on Lake Michigan is well worth the plunge.