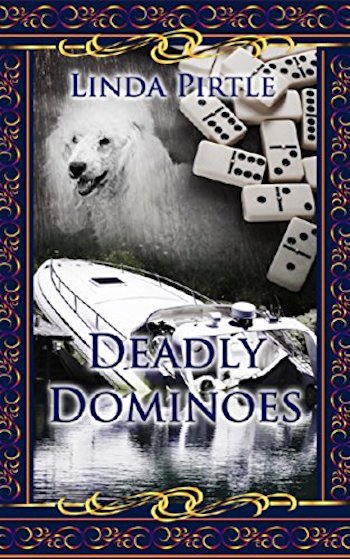 In Book One of The Games We Play Series: The Mah Jongg Murders, Lillian Prestridge, an amateur sleuth, depends on her pragmatic logic and woman’s intuition to solve four murders at Leisure Lake, a small gated community deep in the heart of East Texas where Lillian lives with her husband Bill. The murder of Lillian’s Mah Jongg partner, prompts Lillian to seek refuge in a new environment. Leisure Lake is no longer the retirement community she wanted.

The setting for Deadly Dominoes is Caddo Lake. Situated in the Cypress basin of northeast Texas, Caddo Lake, with its cypress and ancient oaks dripping with Spanish moss, provides the perfect backdrop for mystery, murder, and militia mayhem. Lillian’s curiosity is peaked right from the start. She meets Brandon, a young man who sacks groceries at a convenience store and service station. He gives her a warning.

Does the explosion have any connection to the game of dominoes or with the murders or attempted murders? Lillian must connect the dots.

Caddo Lake spans over 25,000 acres replete with bald cypress trees draped with Spanish moss towering over a maze of bayous, sloughs and ponds. It is a magical, mysterious place steeped in Texas and Louisiana history and has been around for over two centuries.

The lake has had hundreds of alleged Bigfoot sightings. But this novel isn’t about Caddo’s deadly alligators or Bigfoot, it’s about mysterious murders and deadly games of dominoes. Lillian Prestridge, unrelenting sleuth, along with husband Bill, a former investigative reporter, are out for a relaxing RV vacation at lakeside, but are confronted with murders along Caddo’s shores.

Settle in with a cup of tea or coffee as Linda Pirtle takes her readers along a mysterious but cozy path toward solving the complicated crimes. And I forgot to mention one of my favorite characters, their dog, Ely. He adds much to this delightful tale of sleuthing.

n her The Games We Play series, Linda Pirtle has given the book world a fascinating mystery mixed with a touch of East Texas history. Set in the Caddo Lake area of East Texas, Lillian and Bill Prestridge desire to spend some time camping in their RV, supposedly for rest and relaxation.

But Lillian, with the curiosity of a cat, becomes involved in trying to learn who commits the murder of a camper along the jogging trail. The Prestridge’s adopted son, acting as temporary deputy to the local sheriff, also becomes involved in solving the mystery. But before that happens, more murders occur at the campsite.

The camp host and his wife, the local sheriff, the park ranger, several campers all come under suspicion as Lillian continues to raise questions as to motives for the deaths, including the near-death experience inflicted on her husband. In spite of herself being threatened, Lillian follows a woman whom she suspects is involved to a farm several miles away.

While spying on the woman, she comes upon a scene that totally surprises her, yet confirms some of what she has suspected all along–the murders are not just chance happenings. Linda Pirtle has put more twists and turns in this story than are found in a switchback road in the West Virginia mountains. The reader can’t help but be surprised at the final outcome.

Please click HERE to purchase your copy of Deadly Dominoes on Amazon.