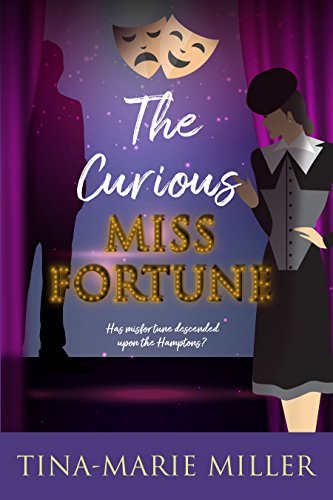 A Pandora’s Box holding the unspoken secrets of village life is set to open.

There’s great excitement as the Hampton Players gather to begin rehearsals on their annual am dram. However, it’s not long before the cast begins to make a connection between the fictional storylines and coincidental occurrences in their villages leaving them fearful that a murder is about to take place.

Aster Maxwell is a successful maxillofacial surgeon who is hungry for success. Desperate to maximize his specialization by opening his own private clinic, will he stop at nothing to get what he wants?

Drama finds itself back in the Hamptons as Poppy and Richard Hambly-Jones make an appearance as they prepare to host the Autumn Ball. Expect the unexpected!

I would like to say that Tina-Marie Miller is one of my favorite authors with a heart of gold she writes an amazing book she has a unique style and flares for writing beautifully written such an intriguing story you could feel the passion.

There will be an exhilaration in the Hamptons it’s a page-turner keeps you interested in the beginning to end.

The characters come alive they take you to a journey of drama, family, love, and loss and so much more get your blanket coffee cozy up next to a fireplace and read this awesome, captivating book it’s a must-read.

Feisty Tiggy Lawrence returns to the gossipy village of Hampton Waters (The Hamptons) to reunite with her dying father, and in doing so she sets male hearts all aflutter.

As with the prequel, Everything Happens for a Reason, author Tina-Marie Miller diligently weaves a love-tangled web.
The book’s focus remains firmly fixed on Tiggy, who is set to inherit Riverside Hall, as per her father’s dying wishes.

A modern-day Bathsheba Everdene, her beguiling beauty attracts the attention of two handsome suitors, namely Aster Maxwell and Harry Martin. A love triangle expeditiously forms and I immediately found myself choosing sides, wanting what was best for her.

The characters, throughout, are deftly realized and so it became really easy to screen the movie in my mind.

With emotional battle lines drawn, a Pandora’s Box holding the unspoken secrets of village life is set to open, unleashing themes of duplicitousness and subterfuge. There are several delightful vignettes to keep the reader occupied (a scene of girl-on-girl action, for instance, is sensitively handled without any undue titillation). Miller has romance in her DNA and love, in its many guises, is championed throughout her book.

The book has a winsome personality all of its own, its characters redolent of people we’ve all met at various points in our own lives.

Like its predecessor, this was a most enjoyable read and I look forward to more from this author!