Daily Review: The Cost of Crude by Inge-Lise Goss 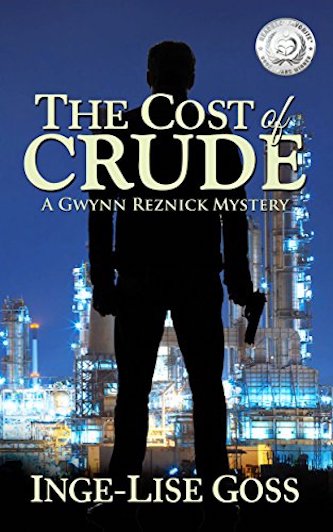 How far would you go to make everything right again in your life?

Gwynn Reznick’s life is shattered when her best friend and co-worker at Wilton Oil & Gas Company dies in a car crash. She doubts it was an accident. Her suspicion is confirmed when a private investigator, Ruben Dordi, shows up at her door. His team has discovered a trail of unusual deaths and disappearances among Wilton employees.

To make matters worse, Gwynn is under constant surveillance by those responsible for her friend’s death. But that doesn’t deter her from getting involved in the investigation. Danger lurks in every corner of the Wilton Tower. One false move could turn a risky situation into a death trap.

˃˃˃ A Hard To Put Down Thriller

As the investigation team digs deeper, they begin to unravel a sinister plot that threatens a catastrophic pipeline disaster. The story follows Gwynn as she delves deeper into the macabre machinations of people who are willing to kill for dollars, and in the process, she learns things about herself that she’d never known.

Will they solve the crime before it is too late?

The Cost of Crude by Inge-Lisa Goss is a great murder-mystery.

Julie is very concerned about a meeting that the CEO is having with some executives from a rival gas and oil company. She decides to plant a few “bugs” to find out what is going to be discussed. Unfortunately, the “bugs” were found and Julie was found dead after a car accident.

The book was well written, had great twists and turns. Highly recommend!

Amazing murder mystery/thriller! I love a good mystery that keeps me guessing until the end, and this book did just that. It’s told through the viewpoint of different characters but mainly focuses on Gwynn, since she’s the main character, searching to find out who killed her best friend.

I loved Gwynn’s character since she was surprisingly relatable! I read a lot of mystery books and a lot of times, the main characters make rash, rushed decisions that somehow end up working out (even though they never would in real life).

As far as thrillers go, this was one of my favorites. I’m really interested in checking out more from Goss!

These are the three words that came to my mind after reading this suspenseful thriller novel. I thoroughly enjoyed the author’s descriptive writing style and the novel’s amazing storyline.

How far would you go to make everything right again in your life?

Please click HERE to find The Cost of Crude on Amazon.