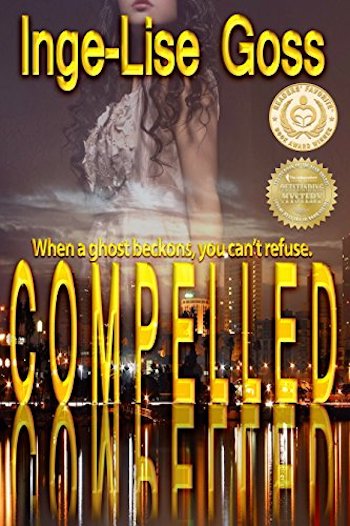 Ghostly Intrigue That Keeps You On The Edge Of Your Seat

New York Detective Sidney Langston is rushed to the hospital with excruciating chest pains the same night a woman who bears a remarkable resemblance to her is murdered in San Diego.

Tests reveal that Sidney is perfectly healthy, yet the crippling pain persists until the dead woman reaches out from beyond the grave for Sidney’s help to vindicate her wrongfully imprisoned husband and to find her murderer.

Desperate to remain pain-free, Sidney embarks on a mission to exonerate an innocent man. With a ruthless killer at large, she soon discovers the crime is more than a simple whodunit when dangerous scenarios unfold.

The dead woman’s spirit relentlessly pushes Detective Langston to solve the crime and correct an injustice or forever be tormented by an invisible bullet wound.

This is one of my favorite books I have read this year. This is a very fast-paced murder mystery that involves good old fashioned police work that is encouraged by a ghost. Sidney is jolted by chest pains, which go unsolved until she is contacted by a medium who has a case for her to solve.

A woman is murdered and her husband is arrested, but things don’t add up. I was pulled into the story at the very beginning and didn’t want it to end. I loved the supernatural push to the book that took it above and beyond your typical murder mystery.

The book kept me on my toes wondering “who done it” and didn’t disappoint. I hope the author writes more books along this storyline, I grew quite attached to Sidney and her sidekick Sam.

Compelled is a rather hypnotic thriller that includes supernatural forces woven within a murder mystery – forces that eventually help solve the crime.

What begins as a woman being rushed to the medical center with extreme chest pains, then receiving a clean bill of health by physicians, soon slips into a highly unusual adventure involving a medium. Chest pains continue to cripple, Sidney, the NY detective, who learns from the medium who contacts her, that she looks much like the woman who was murdered in San Diego.

A victim whose spirit now resides within Sidney, thusly she feels her pain which at times paralyzes the detective.

The plot moves quickly, and the characters are well thought out, however, readers will begin to wonder about a chemistry brewing between the NY detective and the man wrongly accused of his wife’s murder.

By Autumn Fallen Over Book Reviews

have read this author’s work before and I really like how she has a way to draw you into the mystery of murders. It isn’t always just so simple there is some weaving around to find why someone murdered someone.

In this story, we meet Sidney who all of a sudden has these chest pains but she isn’t sure why. That is until she gets a call from Bernice a medium who believes that Sidney can help her.

It seems that Sidney and this ghost have somethings in common and that is why there is a connection between the two.
We see how Sidney decides to help clear this man she has never met before. With the help of a P.I. named Sam they uncover something more and it seems those that are involved will stop at nothing to get what they want. Even if it is framing folks.

Some people are good at being two-faced!

The plot was good and the pace was steady. There was never a dull moment especially with Sidney doing everything in her power to clear Aden’s name.

I really liked how the ghost would try to point Sidney in the right direction even though at times Sidney didn’t know it.