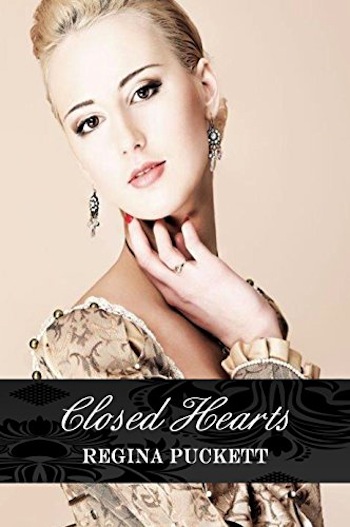 This enjoyable romantic story played well with a finely-tuned paranormal twist that smoothly weaved in and out until the very satisfying end.

Even though Lady Grace only knows a few vulgar phrases in French, once taught to her by a mischievous childhood friend, she somehow pulls off pretending to be a seamstress from France to The Dowager Duchess of Greystone.

Fortunately for Mademoiselle Blancher, as she styles herself, the Dowager doesn’t speak a word of the language. So Grace is able to hide her true identity until her dear cousin Beatrice sends her a message, begging her to return to London.

The poor woman, it seems, needs saving from the same fate Lady Grace had found herself facing two years earlier: a forced marriage to the ever-so-vile Duke of Chesham.

From afar, Viscount Worthington has admired Lady Jane’s feisty, foul-mouth seamstress, Mademoiselle Blancher, but a man of his rank doesn’t socialize with a woman of her class—unless he means to make her his mistress.

But Robert wants so much more than a brief fling. Since such a thing would prove impossible, he keeps his distance, only exchanging glances as they occasionally pass one another in the hallways of Greystone Hall.

When Lord Worthington discovers the seamstress needs his help, though, he’s quick to offer his aid. And so, on the road to London, he learns all of Grace’s secrets. Unfortunately, some come with danger, others with heartbreak, and—if Robert and Grace are lucky enough—some will come with love.

“…How was she ever going to live a normal life? she bemoaned, and what man would want to tie himself to someone who spent so much time talking with the dead? But she couldn’t refuse them, for after all, who else would offer them the aid they so desperately needed?

But was it worth giving up any prospect of a husband and children? That was what she really wanted, to be loved, something the dead could never offer…” And so the Author, Regina Puckett, sets the reader in a world where a Regency world reigned and women’s futures were dictated to, but in this one a paranormal twist played a major part.

This enjoyable romantic story played well with a finely-tuned paranormal twist that smoothly weaved in and out until the very satisfying end. A great sequel to book 1.

This is a different type story written by one of my favorite authors. The time period goes back to perhaps The Age Of Enlightenment when husbands were chosen by a woman’s parents. Because of this, Lady Grace pretends to be a seamstress from France to work for The Dowager Duchess of Greystone, located miles from London.

Grace’s cousin Beatrice messages her asking her to return to London as she, too, is facing a forced marriage to a vile duke. There is one man, Viscount Robert Worthington who is drawn to Grace’s sass and beauty.

He comes to her aid by taking her to London by horse carriage. On the trip, he begins to learn her secrets, and also shares some with her. Grace is in danger of being taken by her uncle and Robert is determined to keep her safe.

This is also a paranormal story, but mostly very interesting about the lives of women in that by-gone era. This had to be a writer’s challenge requiring some research into the dialogue of those days.

I’m impressed, again, with the supreme talents of Regina Puckett.