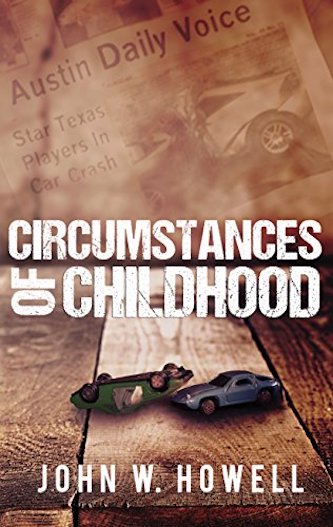 When a former pro football star and broadcaster, now a Wall Street maven is accused of insider trading, will he be able to prove his innocence and expose those who are guilty?

Greg and his boyhood pal dreamed of big success in professional football and then later in business. Greg was the only one to live the dream. Now the founder of an investment fund Greg is faced with a routine audit finding by the SEC.

The audit points to irregularities and all the tracks lead to Greg. The justice department hits him with an indictment of 23 counts of fraud, money laundering, and insider trading. His firm goes bust, and Greg is on his own.

His best friend knows he is innocent but has been ordered under penalty of eternal damnation not to help.

If you enjoy stories of riches to rags, redemption, brotherly love, and a little of the paranormal, Circumstance of Childhood will keep you riveted.

John W. Howell is a member of the Authors Marketing Guild.

Circumstances of Childhood is a work of fiction. The reviews say the book is multidimensional and approaches several of life’s experiences on different levels. I have to believe the reason for this is my childhood had its share of challenges and was a resource in describing various situations that occur within the story.

I wanted to write this book to place some of these situations where they belonged. They are part of a past and should not be reviewed and remembered as if they are part of today.

While writing, I had some very emotional moments, and I have hope that the reader will be able to pick them out of the story.

Most of all, I have a desire that anyone who reads Circumstances of Childhood will enjoy it as much as I enjoyed writing it.

When Keith’s parents take Greg in and raise him as their own son, an unbreakable bond forms between the two boys.

So, it was no surprise that Greg was shaken to the core with Keith’s death that he felt responsible for. This is a tale of Greg’s life, partially told from Keith’s point of view from the “other side.”

When Greg rises to national fame and fortune playing pro football, it looks as though all the horrible losses from his past are over.

But, nothing could be farther from the truth. When he loses everything, all of his money, his wife, his business and his confidence, it looks hopeless.

But, Keith is always there, watching and helping in whatever ways he is allowed. Foreign espionage and corruption enters the picture and builds to a climactic ending.

Written in true John Howell fashion, you never see what’s ahead. And just when it looks like everything will come up roses again for Greg Petros,

Howell adds in a final shattering twist. If you love delving into the psyche and the mysteries of life-after-death with plot twists that could very well mimic the shape of a pretzel, you’ll love this book.

Circumstances of Childhood took me back to my own childhood—or at least to my early adulthood. Like Greg Petros, the protagonist in John Howell’s extraordinary and riveting tale, I was a high school and then college athlete who had dreams of playing professionally. However, my sport was basketball, not football, as is the case in this book.

Fortunately for me, I sustained a career-ending knee injury that pushed me down an unfamiliar path into the U.S. Army. As such I never had to experience the high of earning one hundred million dollars as a pro athlete and even more wealth as a whiz kid fund manager like Greg Petros.
I say fortunately because heaven knows what would have happened had I followed a similar path to Greg’s. As it was, I never had to experience the lows that Greg does when the bottom falls out of his seemingly perfect life, and he finds himself looking up at a cold, unforgiving world bent on stomping him into dust.

This is a book that imparts some harsh life lessons. It is a wickedly terrific stew seasoned with the mystic dust of the paranormal and a few salient drops of spirituality. Without giving away the plot, there are multiple layers to a story that is replete with well-developed and believable characters.

The story is told by two narrators—Greg and Greg’s late boyhood friend Keith. When Keith, who dies tragically in an accident, is telling the story he is doing so as a spirit from the domain of the “Great Majority.” He provides the kind of insights that only a best friend could and though he wants to help his friend he has been prohibited by “The Leader” from doing so.

That is about as far as I want to go into the plot. Suffice it to say; sometimes deific help arrives in the nick of time anyway.
Circumstances of Childhood is a well-told tale that follows the twisting, challenging paths we mere mortals follow as we frantically pursue success, confront devastating loss, suffer crushing ruin and seek and find deliverance.

It is a finely-crafted book you will not want to put down.

Please click HERE to find Circumstances of Childhood on Amazon.