Daily Review: The Chronicles of Aveline: Awakening by Ken Fry 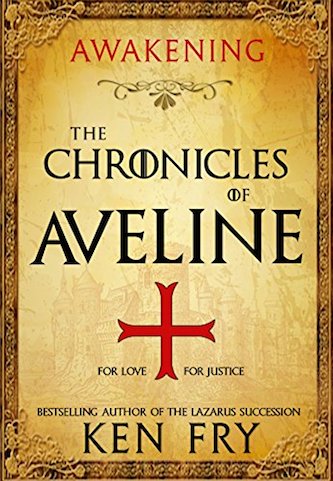 The epic tale of a young woman’s incredible courage and loyalty even in the most desperate circumstances.

It is the year 1181, and an aging, battle worn, Sir Philip Fitzwilliam contemplates the changes the last Crusade inflicted on the landscape and on his estates.

The weathered grey bricks of Froulingham Manor look down the valley, the nearby woods and a countryside decimated by holy wars, where once men dwelt, but never returned from the religious
hatred and conflict the Holy Land inflicted upon them.

Sir Phillip, concerned by rumours of a shifting balance of power favouring Saladin’s Muslim armies in the Holy Land, fears yet another conflict.

He contemplates the future of his estates, and those of his two sons, Giles, his favourite, the other Raymond, an aspirant monk, and his beloved, gifted daughter… Aveline.

Aveline who thrived in the pursuits of men, skilled with a bow and arrow, and destined to be married off to a suitable man someday.

Aveline, who discovered the joys of love, to her own, and her lover’s detriment. Persecuted by the Church and separated from her lover and family.

THIS IS HER STORY.

The Chronicles of Aveline is the epic tale of a young woman’s incredible courage and loyalty even in the most desperate circumstances. A captivating story of family, love, heartbreaking trials, deception, and one woman’s determination to reclaim everything that was taken from her.

I must admit, I’ve become a die-hard fan of Mr. Fry’s excellent historical thrillers, so I was unsure of what to expect when I purchased THE CHRONICLES OF AVELINE: AWAKENING. Happily, I discovered from the very first page that Fry’s trek into historical fiction romance is of the same high quality, and every bit as enthralling as any of his previous works.

I was immediately drawn into Aveline’s plight, when even as a young girl of 12 she was convinced there had to be more to life as a female than a pre-arranged marriage and all that went with it. She longed for adventure and the pursuits normally relegated only to men. She did desire to someday marry and have a family, but preferably with a man she truly loved.

Such desires were not easily achieved in the 12th century by young noble women. But Aveline, strong-willed, courageous, extremely skilled with both a bow and a sword, was no ordinary noble woman, and her story is no ordinary tale.

Fry’s writing, as always, is superb, with descriptions that made me feel more like I was watching the story unfold in front of me than merely reading about it. The pace of the story couldn’t be more perfect. The characters, good and evil, are all entirely realistic.

I loved this story, and will find it difficult to wait for the next book in this series. I definitely recommend THE CHRONICLES OF AVELINE: AWAKENING to all.

When we first meet Aveline, the young daughter of Sir Phillip Fitzwilliam, Lord and Former Crusader, she is a young girl of 12 years old and not too happy with the prospects of becoming a young woman in the 12th century. “Was that all life was about?” She wants more, to have as much fun and liberties as boys have; she wants adventure and that’s exactly what life will throw at her.

Quite by chance, she discovers how very skilled she is with a bow and arrow and generally in the art of war. She is lucky to have Sir Cedric to mentor her, a former Crusader and best friend of her father as well as her father’s approval and support.
It was lovely to see Aveline blossoming as she grows up.

But then, just as she thinks she has found what she was looking for, things rapidly spin out of control. Remember, it is the time of the Third Crusades. Yet Aveline proves to be a really resourceful young woman and I enjoy following her adventures.

There is a lot of love and sorrow and some really excruciating moments she has to go through, yet she finds the strength to push through.I felt, at times, sad and happy with her and I nearly cheered when her plan came through.

This is a wonderful story of love and war, of deep passion and ghastly betrayal and cunning plots but most of all a lovely tale that reads easily and it sweeps you off your feet from the first page.

I am really looking forward to discovering what Aveline’s future holds for her!

Please click HERE to find The Chronicles of Aveline on Amazon.