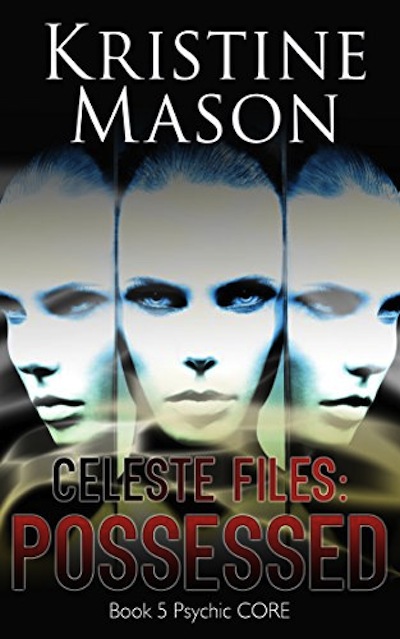 The author has a diabolical brain and likes to put her characters through hell.

Her husband is a killer…

John Kain is possessed, trapped in his own body while an evil spirit takes over his life. But the sinister ghost isn’t just interested in a second chance at life. He has a diabolical agenda, one that involves murdering John’s family.

Months ago, psychic Celeste Kain sent the dead 1920s gangster, Vigo Donati, to Hell. Or so she thought…

When her husband becomes erratic, violent and out of control, she finds a hidden cache of prescription drugs and worries John has an addiction. Until a psychic vision shows Vigo killing a man. The coincidence is too much and she’s convinced the gangster has taken control of John.

With her family in danger and John’s life at stake, Celeste needs to rid her husband of Vigo’s spirit before he uses John’s body to kill. Because if Vigo wins, she’ll lose John forever…

By Patricia A. White

John and Celeste are back with a bang!! I love these characters they’ve been through some crazy things but now John is possessed by a evil ghost who wants to kill his family. I was on the edge of my seat though this whole book.

I’ve been looking forward to this book since I finished Poisoned and it did not disappoint. Kristine Mason always comes up with some really twisted bad guys and of course the ending is leading right into the next book .

If you love Romantic suspense with really evil bad guys, awesome story line and great love story with a little paranormal thrown in you have to read this book

Celeste and John Kain are character’s we met in the first book of the Core series. Since that book the author created a separate series for them as Celeste is the only character in the Core series that deals in the paranormal. John was a bit of a dick about Celeste’s psychic visions when they first met and even at the beginning of their marriage.

He loved her but it was hard for him at first to accept the things she could do and how at times it put her in danger. When they had their first child he worried even more because she could go into a trance at any time endangering their daughter.

As time went on, John came to accept Celeste’s gift and even got to see first hand the good it could do – finding lost children – saving souls from the evil keeping them from passing on – and that their love grounded them both in the real and spirit world. . The last book dealt with a really evil ghost that had been killing for over 100 years. Turns out at the end of that book things didn’t end quite the way we thought they did.

Now on to my feelings about this book. Yes feelings and not review. Why.. Well I realized while I was reading this book that sometime during the six books John and Celeste have been in I became very protective of John. The author has a diabolical brain and likes to put her characters through hell. Especially these two.

I equally love both John and Celeste’s characters and think they are perfect for each other. They have been through so much that a part of me just wants to them to have some normalcy for a while. What happens in this book is so far from that and what John has to go through during this book was almost more than I could handle. Remember that evil ghost I mentioned from the last book – well he has possessed John’s body for months now and only John who is locked inside his own body with the madman knows.

He has to watch this evil man play husband to his wife and father to his kids. This was at times more than I could stomach to read.. For once I couldn’t wait to get to the end of the book – where I hoped a happy ending awaited (well as much as of a happy ending as this author likes to give). And it WAS a great, heart warming, touching ending that I was ecstatic about.

Even though this book “upset” me due to my feelings about John – who yes I know is a fictional character, I love this author and please take this “review” as a little tongue and cheek as its meant to be.

Please click HERE to purchase your copy of Celeste Files: Possessed from Amazon.