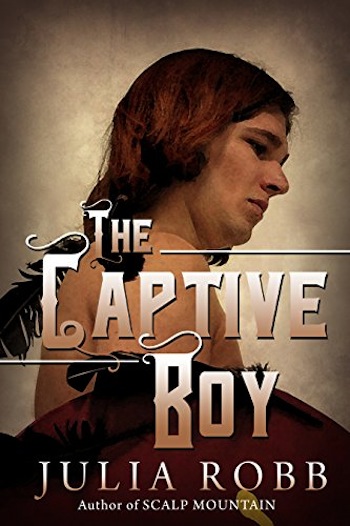 It’s a complex story with emotional swings, tragedy and atrocities. It doesn’t try to hide the realities of war.

Col. Mac McKenna’s Fourth Cavalry recaptures white captive August Shiltz from the Comanche, only to find August is determined to return to the Indians. McKenna attempts to civilize August and becomes the boy’s foster father.

But when August kills another boy in a fight, McKenna rejects him. August escapes from Fort Richards (Texas), and when war with the Comanche breaks out, McKenna discovers August is a war leader–and his greatest enemy.

I was fortunate to be given a final draft version of Julia Robb’s latest work, The Captive Boy. It is a fascinating true to life tale on the Texas frontier in the early 1870s. Ms. Robb’s thorough research and deft grasp of the history surrounding both native and army cultures of that fascinating era is remarkable.

Coupled with her personal knowledge of the majestic Texas landscape, Ms. Robb weaves a compelling story of a young German emigrant child who is abducted by a Comanche band who killed his family. Adopted by the chief, assimilated into Comanche society, and raised a warrior, he is recaptured by the U.S. Cavalry as a teenager.

Resistant to the honest, if not futile, attempts to reintegrate him into the white world, the boy makes his escape and swears revenge on the Cavalry. Robb captures the terror of Michno’s A Fate Worse Than Death and the engrossing narrative of a Terry C. Johnston novel using a complex style similar to how Bram Stoker presented Dracula, told from various diaries, newspapers, letters, journals, etc., each presented from different perspectives..

Her characters have depth and the action moves the story along at a rapid pace. I don’t often read fiction, but greatly enjoyed Julia Robb’s The Captive Boy.

The Captive Boy opens with August Shiltz being forced into the office of Col. Mac McKeena at Fort Richards. The colonel attempts to take the boy under his wings and goes the extra mile in his attempt to do so. August resists any attempt at assimilation, insisting he is from the Quahadi Band of the Comanche. When McKenna sends August to school with other kids from the Fort, one in particular makes a habit of taunting August. After a series of confrontations, August kills the trouble maker and flees.

A short time later, a supply train to Fort Richards is ambushed by hundreds of Comanche. One of the teamsters was brutally tortured and disfigured. After an investigation soldiers found a calling card. August had become the leader of the band of attackers.

I’m a big fan of Julia Robb’s novels. This has become a new favorite. Set during the Red River Indian War, it covers a vast expanse from Fredericksburg, Texas in the south to the Llano Estacado in the north and from the southern plains to Santa Fe.

Now the best Indian fighter in the Army with his 4th Cavalry follow the trails and scouts to track down the brutal Comanche in a life or death struggle. The story is told through the eyes of witnesses though journals and other historical documents in a style that reads a fresh as the morning news.

The author, Julia Robb, thoroughly researched the period and the places. Her characters have rich, realistic, multi-dimensional traits. It’s a complex story with emotional swings, tragedy and atrocities. That said, it doesn’t try to hide the realities of war and does not blush in the presentation of those hard facts.

You’ll find a rich, literary quality to The Captive Boy. I don’t think you’ll be disappointed.

Please click HERE to find The Captive Boy on Amazon.