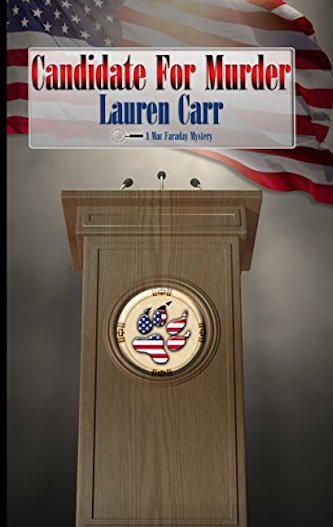 A very complex set of storylines develop that the reader will appreciate, especially when the mystery explodes in the final chapter.

It’s election time in Spencer, Maryland, and the race for mayor is not a pretty one. In recent years, the small resort town has become divided between the local year-round residents who have enjoyed their rural way of life and the city dwellers moving into their mansions, taking over the town council, and proceeding to turn Deep Creek Lake into a closed gate community—complete with a host of regulations for everything from speed limits to clotheslines.

What starts out as a joke turns into a disaster when overnight Gnarly becomes the front-runner—at which point his political enemies take a page straight out of Politics 101. What do you do when you’re behind in a race? Dig up dirt on the front-runner, of course.

Seemingly, someone is not content to rest with simply embarrassing the front-runner by publicizing his dishonorable discharge from the United States Army but to throw in a murder for good measure.

With murder on the ballot, Mac Faraday and the gang—including old friends from past cases—dive in to clear Gnarly’s name, catch a killer, and save Spencer!

This is called a Mac Faraday Mystery, but really, it’s all about Gnarly. In the first chapter of this book, we witness the incident which ended Gnarly’s military career. In the next chapter, David is babysitting Gnarly, when he becomes disgusted with the Mayoral race in their town of Spencer, and signs Gnarly up to run.

The book proceeds quickly and, at times, comically from there, with a couple of people turning up dead, Gnarly being allegedly a suspect in one of the murders, I always feel funny saying that people getting murdered make a fun romp,but Lauren Carr really makes this happen.

Great book, well written, and it was great to have a book mostly about Gnarly!

In installment twelve of the Mac Faraday mysteries author Lauren Carr hits a home run out of the ballpark with perhaps her finest book yet. Spencer police chief David O’Callaghan takes his investigative journalist girlfriend out to dinner but ends up at the town’s mayoral debates. Candidate Bill Clark is a brash arrogant bully who is head of the town council.

His opponent is Nancy Braxton, a compulsive liar and former murder suspect who is married to a former Super Bowl-winning Redskins quarterback (and known womanizer) who is chairwoman of Braxton Charities, an organization with questionable activities.

Once the two started name calling the debate turns into a fist fight with Chief O’Callaghan catching a punch when he steps in to break it up causing him to put both in jail overnight. The next morning David becomes so irritated at trying to convince the two that they are too unpopular to keep up these hostilities that he takes his brother’s military veteran German Shepard, Gnarly, downtown to register him as an independent candidate for mayor.

As Gnarly’s popularity soars in the early polls the candidates try to smear him through his secret military service and suddenly old suicides and unsolved murder cases are reopened and each seem to have a connection to this election.

A very complex set of storylines develop that the reader will appreciate, especially when the mystery explodes in the final chapter. In the epilogue, I don’t think I ever laughed so hard at anything I read in a book. It’s great. You will not regret reading this book.

Please click HERE to find Candidate for Murder on Amazon.