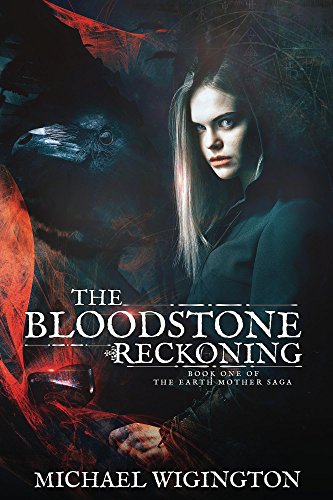 I found this novel to be original, fascinating and gripping; it is a fantasy novel that I have fallen madly in love with.

The Bloodstone. In the wrong hands, it will wreak havoc.

Tabitha’s hunt for the truth leads her into dark encounters with a vengeful warlock bent on finding the ancient relic.
Will the old crone’s tutelage provide the answers Tabitha seeks, or will the past be something she should have left alone?

The Bloodstone Reckoning is such an amazing story that really gets to the hearts of the characters! I love fantasy novels for their epic world building and character depth, and that’s exactly what this novel gives from page 1!

The main character Tabitha is extremely multi-dimensional and is one that we can all relate to on many levels. What I liked most about her, and the style of this book is we can all see our best selves in her – she is brave, thoughtful, fearless, and compassionate. Her relationship with the Earth mother is one of curiosity and intrigue and this book leaps into that part of the story quickly so you won’t have to wait long to get into the meat of the action!

Michael Wiginton has done such an amazing job developing a tale that, in comparison to other novels in this genre, is enthralling and accessible to readers no matter if you’re new to fantasy or have been reading it for years. And it’s not overly long! Wiginton understands that good doesn’t equal long. The book is the perfect length for the plot and enjoyment. I don’t want to give too much away, but I am eagerly awaiting the other novels in the series!!

The Bloodstone Reckoning is 5 stars for me!

The Bloodstone Reckoning is a wonderful, sweeping epic fantasy tale that has enthralled and excited me as a reader. It has been a while since I have read an exceptional fantasy novel, mostly because I find them all to be repetitive and lacklustre but The Bloodstone Reckoning is different as I found this novel to be original, fascinating and gripping; it is a fantasy novel that I have fallen madly in love with and I am so excited for when book two in the series is released!

The Bloodstone Reckoning is an intricate, detailed novel that holds an incredible premise and storyline that will both excite and terrify its reader. This is one of the reasons why I am going to be careful not to reveal too much about this epic tale as I do not want to spoil it for all of you lovely readers!

Our story follows a young and sweet fifteen-year-old girl named Tabitha Millhouse; Tabitha is a character the reader can easily sympathize with very early on in the novel as she has lost her mother and her father does not help matters by being distant and not letting her know any information about where they are from and what is going to happen.

This is where our novel starts to begin as Tabitha – after a terrifying encounter – is forced to understand and discover her past all whilst she is on a journey of self-discovery. Whilst she starts to discover her past she will unlock previously hidden secrets and on her journey, she will encounter deadly creatures who mean her harm and this is where our epic fantasy tale begins.

To say The Bloodstone Reckoning floored me is an understatement, this novel captivated and enthralled me from beginning to end! I was captive to this wonderful piece of literature and all I could do was surrender to its beauty and be swept along in a brilliant and intriguing tale. It is a novel that has an air of suspense and tension that keeps you on the edge of your seat, this, combined with fantastical creatures, both terrifying and beautiful ones will make the reader read in awe and sheer amazement… I know I did!

When I started to read this tale one thing was apparent to me very early on and this was that the author Michael Wigington is a wonderful and flawless writer. Wigington’s writing has a timeless feel to it and very early on I felt compelled to keep on turning the pages due to his intricate and brilliant writing. It was apparent to me from the get-go that Wigington has managed to create an incredible world full of wonderful fantastical creatures, his world is intricate and detailed and never ridiculous.

I always worry about fantasy novels that the creatures will be silly or worse, boring but Wigington has created the perfect balance with The Bloodstone Reckoning as all of his creatures and characters work perfectly well together. He has ensured that the reader will never get bored due to his thrilling streamlined plot which keeps the reader hooked with its many twists and turns. As well as his plot and writing being impeccable, so are his characters and without the novels incredible protagonist Tabitha Millhouse I do not believe this novel would have been the success it has been.

She is a flawlessly executed character with a wonderful backstory and more importantly a purpose. I love reading about a protagonist that is on a journey of self-discovery and one that wants to fulfill something, she has a purpose and this is very important to me. So once again I am thrilled that this novel was so exceptionally well written and I really do have to praise the author of the novel Wigington for this!

To conclude my thoughts on The Bloodstone Reckoning I would say if you are a reader who adores fantasy as well as plentiful amounts of action and suspense, combined with fantastical creatures and an incredible protagonist then you will adore this novel! This enthralling book gets Five Stars from me!

Please click HERE to find The Blood Reckoning on Amazon.