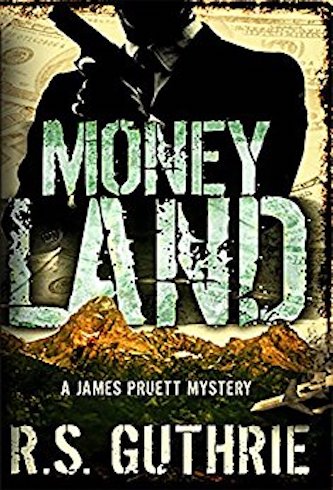 In this gripping and rewarding novel. Guthrie skillfully juxtaposes the ugliness of the worst of human behavior against inspiring and tender relationships.

Money Land is the sequel to the riveting, Blood Land, that introduced the Sheriff James Pruett Mystery/Thriller series. Big crime has come literally crashing down on the small town of Wind River, Wyoming.

When a small plane bound for the Canadian border carrying money for the Sustantivo Cartel smashes into the glacial Wind River Mountains, the event brings a heartless evil presence to one of the more remote places on earth.

The tail of the plane is discovered, empty. No drugs. No money. Shortly afterward, people start dying. When the cartel comes to town, Pruett will do anything within his power to save his town, his people, the land, and his family. Anything.

Once again in the sparse, gritty, starkly poetic styling of James Lee Burke, Tony Hillerman, and John D. MacDonald, R.S. Guthrie brings you his classic hero, James Pruett, at odds against the Sustantivo drug cartel, his own friends and citizens, and federal agencies that have agendas beyond those printed on their Mission Statements.

This is the second book I’ve read by author Guthrie. The first was Blood Land aka DARK PRAIRIES – the first in the Sheriff James Pruett series. I recommend reading BLOOD LAND before diving into MONEY LAND. You would probably understand what was going on in BLOOD LAND but why miss out on another stellar book?

The s*** has hit the fan for Sheriff Pruett’s county. A Mexican cartel plane carrying millions of dollars heading to Canada to be laundered crashes in the high country and the cartel wants their money back – no matter what.

Brutal, twisty, turny, rather unbelievable at times (but this is fiction) – author Guthrie continues the adventures of Pruett and his constituents who won’t give up and will do anything to protect their homes and ways of life.

Super characterization (I feel like I know these characters personally); spot-on dialogue; a fast-paced, exciting storyline – all come together in this winner of Guthrie’s.

Money Land is the sequel to RS Guthrie’s Blood Land, which was originally titled Dark Prairies. Guthrie himself called it his magnum opus, and any reader can see that the author had poured his heart, soul, and sweat into it. It was an ambitious novel that successfully combined a western murder mystery with a deep human tragedy. Between the virtual covers of that one novel,

Money Land picks up three years later, with the protagonist, Sheriff James Pruett of Wind River, Wyoming, having come to terms with his wife’s murder. He has been clean and sober since and has been rebuilding his relationship with his daughter, Wendy.

Guthrie has labeled this novel “A James Pruett Mystery.” It’s not as personal for the author as Blood Land or even as his paranormal/occult horror/mystery-thriller novels featuring Bobby Mac: Black Beast and LOST. Money Land is more of a straightforward mystery, and Guthrie succeeds in keeping his readers turning the pages (or flicking the screens of their e-readers).

Guthrie knows how to create deep, realistic characters that have many sides to them. There are aspects of his heroes that enrage me, and sides to the villains that could make me cry. Even the tertiary characters, like the dirtbags who mostly annoy and distract the Sheriff, have nuances that I admire. Creating a novel filled with complex characters takes a writer of skill and subtlety.

In this gripping and rewarding novel. Guthrie skillfully juxtaposes the ugliness of the worst of human behavior against inspiring and tender relationships and the spectacular backdrop of Wyoming’s plains and mountains.