Daily Review: For the Birds by Jinx Schwartz 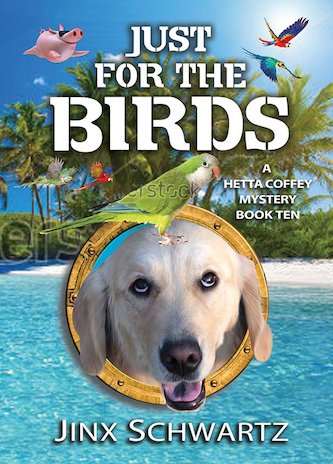 Will the gang be successful in stopping the bird smuggling of the birds or will they lose their lives?

Hetta Coffey is a sassy woman with a snazzy yacht and she’s not afraid to use it!

While docked at Marina de la Paz, in Mexico’s hauntingly beautiful Sea of Cortez, Hetta gets a surprise visitor that sets off a chain of events like only Hetta can manage to get herself embroiled in.

With her best friend, Jan, and her dog, Po Thang, they are hot on the trail of some dastardly smugglers.

Hetta is just chilling on her boat when an old friend (? ) arrives. It is her monk Parrot Trouble that she gave away to a bird sanctuary. The bird is all covered in an oily substance and his feathers are badly ruffled.

This poses a mystery for Hetta to solve and a reason to get her friend Jan to visit. She also calls on Craig Washington a veterinarian to come and look over her bird. After she reaches Humberto, the caretaker at the bird sanctuary.

She knows that there must be something strange going on. He spoke to her only in Spanish while he is very fluent in English. He tells her that Trouble is at the sanctuary and doing fine.

After some research, the gang realizes that Trouble must have escaped a bird smuggling ring. They also realize that Humberto and Paula must be being held captive. So the gang takes off on a trip to investigate and solve the mystery.

In the usual Hetta style when she and Jan get together, this time with the added help of their friends Craig and Roger. You know that some questionable acts and some strange situations are sure to follow.

For the Birds is another hilarious adventure for the dynamic duo of Hetta and Jan. The Lucy and Ethel of the Mexican yachting community.

Hetta gets herself in more trouble–and she really looks for it! Her parent’s bird – which became her bird-named TROUBLE for a very good reason – appeared on her boat and got in a tussle with Po Thang-her lovable dog!

Well, I will say that bird was mighty smart and picked up quickly what would work – detente! I just love the cover of this book. It reminds me of when I had a trained canary and a puppy. The canary would dive bomb the puppy’s head. The puppy grew up-and chased that bird for all he was worth. Detente between those two? Never.

Because of the way Trouble looked–all greasy and barely eating–Hetta called her veterinarian friend. She found out they smuggled exotic birds–and she was bound and determined to stop those dirty no good—while at it–huffing and puffing up hills–she and her cohorts suddenly realize that birds aren’t the only thing getting smuggled!! Hetta calls in the Calvary!

I found myself alternately laughing, shaking my head and worrying (hey, I’m an animal lover). Do Hetta and gang manage to save the birds and the others? And just who was the ultimate smuggler? You will have to read this book to find out.

TROUBLE is back creating chaos in Hetty Coffey’s life in the 10th book of the series. He is slimy, underweight and refusing water and food. TROUBLE’S plight alerts Hetta that something is wrong at the bird sanctuary.

She calls Jan to come to La Paz to aid her to keep P.O. Thang and TROUBLE apart. Together they call several veterinarians to check TROUBLE. The parrot’s and Po Thang’s antics will have you laughing and smiling. Craig and Roger arrived and it is decided to scout out the bird sanctuary.

When Hetta is angry anything can happen and the book begins a series of twists and turns that won’t want to put the book down. I read in one sitting. Will the gang be successful in stopping the bird smuggling of the birds or will they lose their lives?

I HIGHLY RECOMMEND THIS BOOK AND SERIES.

Please click HERE to find For the Birds on Amazon.