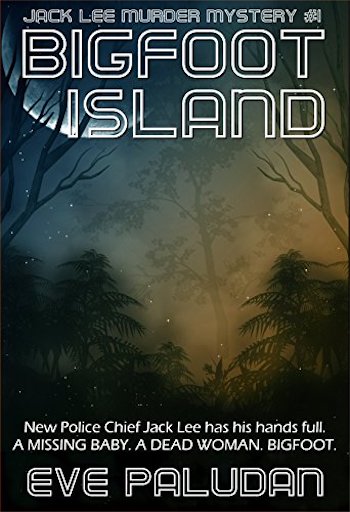 What happens when a female Bigfoot rescues a human infant from a mudslide?

A year ago, Jack Lee’s homicide detective partner was killed in the line of duty. Ever since, his law enforcement career and marriage spiraled down.

He decides to reinvent his life and leave Seattle to take a job as the police chief of Cedar Island, Washington. He grew up there and plans on a quiet life in the small island town where he once felt happy and secure. His artist wife, Margo, is a reluctant city girl and she only goes with him under protest. Her niece, Jenn, who will soon be college bound, also joins them.

Immediately upon moving to his dead father’s house on the waterfront, his new job as police chief of Cedar Island challenges him with the aftermath of a devastating mudslide, the mystery of a dead woman, a missing infant, and rumors of a Bigfoot presence. Within twenty-four hours of taking the new job, all hell breaks loose on the island – – it seems that nothing in Jack Lee’s world is going to be as easy or as safe as he thought.

Enter Jack’s longtime best friend, Dr. Allie Chandler, an anthropologist. Her wacky lifetime obsession with searching for the Sasquatch could be the saving grace in a dangerous situation.

Readers will enjoy a third-person mystery from the point of view of the female Bigfoot, which alternates with chapters from Jack Lee’s point of view (and other characters’ points of view), until the plot intersects their paths with exciting action between the humans and the Bigfoot. While many monster novels tend to demonize mythical creatures, BIGFOOT ISLAND is a refreshing look at what goes on inside the minds of the misunderstood creatures that star in this new, exciting series.

This delightful mystery was a fun way to spend an afternoon. Imagine the world of Bigfoot, if they did exist how would they see the humans that they see in the distance; that’s exactly what Eve Paludan gives us. Tie that in with a natural disaster, a mysterious death and a fascinating island off the coast of Washington and you have a great read.

The best part of Eve Paludan’s books are her characters, they all have imperfections which make them so human and easy to relate to. This one was no exception, can’t wait to read the next in the series…will Bigfoot be there too or will we get to meet a different mysterious creature?!

Get a grip all fans of the historical sightings circulated about the elusive and mysterious `Bigfoot.’ A new series BIGFOOT ISLAND (Jack Lee Murder Mystery #1) by Eve Paludan, the best-selling author of multi-genre stories, has given reality to encounters documented over the ages! The author has instilled a memorable and detailed appreciation of Una, the Bigfoot, who is introduced as the likes of a loving, intelligent, family oriented member of planet earth.

Torrential rains have split half of Cedar Island, Washington State, where an entire population of primitive Sasquatch are buried in a mudslide. A female survivor hears a crying infant and her maternal instincts lead her into dangerous territory to feed the child. Una is enormously tender and a protective caregiver.

What a shock it is for new Police Chief Jack Lee to be called to report for duty before unpacking on arrival by ferryboat from Seattle. He gets a telephone update on current investigative reports and leaves home in a hurry. Jack arrives at the police station and encounters unwelcomed big city problems. An infant is reported missing, a woman’s death is mysterious, a prominent citizen cannot be trusted, Bigfoot is spotted carrying a baby toward the mountains, his best friend keeps a secret and his wife doesn’t like island life.

Only hours prior to arrival, Jack’s best friend and next door beach house owner, Dr. Allie Chandler, an anthropologist, had prepared a welcoming dinner for Jack, his artistic wife Margo, and their vacationing college bound niece Jenn. Allie leaves all the food on the table. But when the family arrives it looks like wild beasts have invaded and trashed the place. How did the invaders get into the house and what kind of beasts were they?

Allie and Jenn get caught-up in their own great adventure together. Allie discovers that her anthropological research gives accurate data and her bravery leads to the dangerous investigative work she decides to pursue. These next events are breathtaking and create exciting and cautious encounters that become thrilling turning points in the Bigfoot story.

Feel the ease of conversational language, friendly squabbles, and fluid results of investigations. Enjoy a different kind of adventure as you read with excitement the fast-moving, most unusual and entertaining new series BIGFOOT ISLAND (Jack Lee Murder Mystery #1) by Eve Paludan.