Daily Review: And So It Begins by Rachel Abbott 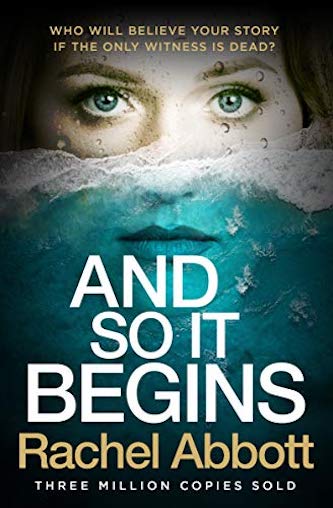 This is a very disconcerting, puzzling, and immersively-written gem of a mystery/suspense/thriller.

Cleo knows she should be happy for her brother Mark. He’s managed to find someone new after the sudden death of his first wife – but something about Evie just doesn’t feel right…

When Evie starts having accidents at home, her friends grow concerned. Could Mark be causing her injuries? Called out to their cliff-top house one night, Sergeant Stephanie King finds two bodies entangled on blood-drenched sheets.

Where does murder begin? When the knife is raised to strike, or before, at the first thought of violence? As the accused stands trial, the jury is forced to consider – is there ever a proper defense for murder?

Looks can be deceiving, in more ways than one… This is true for many aspects of this new page-turner by Rachel Abbott, one of my favorite authors. I do hope that this is the first in a new series as I believe there’s much more to come for the acting detective at the heart of this story, among other characters. I love the DCI Tom Douglas series of books and would love to see a set for Sergeant Stephanie King!

I’m not one to rehash the synopsis, as you can gauge that for yourself by reading the description provided. If you’re reading this, then you’re already intrigued, and let me say, it will not disappoint! At first, I wasn’t quite sure of the direction the book was heading in and it seemed a little too mild. Oh, I knew something was not quite right, but it does end up being more than you expect once it all unravels. And it sure does keep unraveling! It’s a perfect example of how one little piece of information can tie a series of events together and the reader will want to be sure and pay attention.

The setting of much of the story is so descriptive and breathtaking, that I can imagine being there, watching the story unfold, feeling the breeze of the sea and hearing the waves crashing against the rocks. The atmosphere quickly draws you in and holds you in its grasp the entire time. I only wish the tale hadn’t come to an end, I was literally left feeling that I wouldn’t be able to just accept that the story was over – I simply must find out where it goes from here! I hope fellow readers will be there to take the journey, as well.

This book completely blew me away! The plot is so thick and twisty, it could stand up a spoon for eternity. I read this in one sitting, I couldn’t put it down. Rachel Abbott has truly put together one engrossing, dark, unique, and excellent novel that will leave people with their heads spinning. Kudos to her for such a distinctly admirable job in writing this spell-binding thriller!

She paced her plot keenly, utilizing flashbacks just enough to give readers a tidbit of information that would make one think, then continue on. This feeding of information would give a reader enough information to puzzle even more, and I was kept on my toes the whole way through. Her characters are well-penned, fleshed out as time passes extremely well. There are many passages that I found to be profoundly important and she deftly addresses issues without the need for a soapbox.

The sub-plots are critical to the overall theme and direction of the story, adding more layers to achieve an exquisitely-crafted mystery/suspense/thriller. The main characters, Evie, Mark, and Clio are outstanding as a trifecta of possibilities. Ms. Abbott uses them to great effect, and one never really knows what is or has been done, thought or planned by them. The setting echoes the overall theme of the book and adds to the compelling unease.

All that written, I am very impressed and pleased by this novel. The ending is especially creative and took me quite by surprise. This book shows true talent and I am 100% confident in giving it five stars and fully recommend it. This is a very disconcerting, puzzling, and immersively-written gem of a mystery/suspense/thriller that was worth every penny. So do yourself a favor, and jump on it to see why I am so impressed! I think that you will be writing a glowing review, as well.

Please click HERE to find And So It Begins on Amazon.