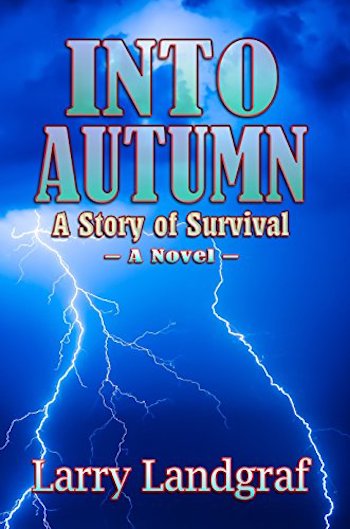 Landgraf realistically portrays the intricacies of relationships between people living in extraordinary circumstances.

Lars is living alone in the Texas countryside when the economy collapses and his world becomes a dystopian nightmare. Joined by outsider Eileen, he and his neighbors band together for survival in their “Peaceful Valley.”

They must learn to scratch out sustenance while fending off predatory invasions in an increasingly violent and lethal world. Into Autumn is a sweeping adventure, a thought-provoking saga that could happen to us all.

Into Autumn is a science fiction story written about a man named Lars Lindgren. An apocalypse has happened ending any electricity, water, services, and gasoline. Life is hard for everyone, and Lars is able to somehow survive by planting vegetables on his 40-acre land and eating off the fish and animals he traps. A woman named Eileen knocks on his doorstep, and that is when things really begin to ship shape. The story unfolds with a few twists and turns, wrapped with a description of Lars life right up until the end.

The beauty about this book is that it provides an excellent description of how to survive in really harsh situations. The author manages to excel in that aspect and make it as realistic as possible. The story was very absorbing and interesting to read. The characters were relatable and were developed delightfully. Every character had a different way of dealing with things, and the author manages to give each character a point of view without making it confusing.

Another enjoyable fact about this book was that it did not jump from one scene to another just to force excitement or induce a false thrilling effect. Every scene was smooth, well written and a pleasure to read.

The literature standard was admirable, and there were no annoying editing issues you would usually see in books nowadays. I felt that the layout of the story was well thought out, and the realistic approach this author has made towards the plot is what makes it unique and worth the read.

Lars Lindgren has entered the “autumn” of his life planning to live out the remainder of his years in self-sufficiency at his cabin deep in the South Texas wilderness. Having worked hard through the summer of his life, Lars has achieved this goal following his divorce from a woman who did not share in his dream of getting away from it all.

Having only one grown son with his own family to tend to, Lars believes he’ll be happy to live in solitude with only a few distant neighbors to visit and trade with on rare occasion only he comes to discover that something is missing in his life. When a world-wide economic disaster brings civilization to a grinding halt, Eileen Branson, a twice-divorced fifty-year-old stock analyst from San Antonio, sets out to escape the deadly dangers of a big city overcome with end-of-the-world violence only to find herself eventually crossing paths with Lars.

Albeit somewhat reluctantly at first, Lars accepts Eileen as a companion to help share the physical burdens in his life, only after he discovers in her a woman of drive who is willing to learn everything he has to teach about survival, Lars allows Eileen to shoulder his emotional load as well. As the death throes of civilization cast more desperate people further into the wilderness in search of food and shelter, Lars, Eileen and their neighbors in the optimistically named Peaceful Valley must make tough choices and labor long and hard in order to ensure their own survival while dealing with the scavengers who would take everything they have worked years for to accomplish in the only way they know how.

Considering that this is a debut novel, Larry Landgraf’s Into Autumn bears an enormous emotional draw in the struggles faced by the main two characters whom readers will find easy to like and naturally identify with throughout their development. With the assistance of the sort of dedicated team of editors and promoters authors have in the big publishing houses, “Into Autumn” could easily find itself on the bestseller lists based solely upon Landgraf’s ability to subtly dissect his protagonists’ psyches and bring their struggles to life on the pages of a book that flows with ease.

A man less self-assured would have made the mistake of dwelling on the whys and hows of the “grid” going off-line or on gory, post-apocalyptic tales of life in the city; instead Landgraf appropriately focuses his narrative on where the true story is and realistically portrays the intricacies of relationships between people living in extraordinary circumstances.

So engaging are the characters that readers are likely to feel devastated in the denouement of chapter thirty-four, but true to his own philosophy of life which Landgraf neatly elucidates for the reader, the author keeps his characters on course through the very last line as time and again they choose practicality as a way of life in order to survive.

Please click HERE to find Into Autumn on Amazon.