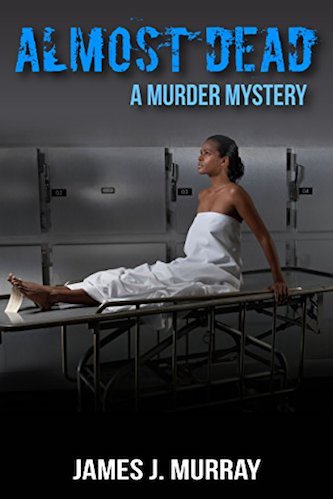 Detectives Rosie Young and Vince Mendez chase an elusive villain when not one but two victims turn up alive less than twenty-four hours after their death.

The body count continues to climb as the detectives investigate how two seemingly unrelated victims share an almost identical near-death experience but have no memory of the event.

The trail of evidence leads to startling revelations of deceit, greed and an international conspiracy in this entertaining murder mystery.

Think “Murder She Wrote” meets “CSI”. This is the sort of murder/mystery anyone can read. There’s limited violence, and I don’t think there was any swearing. It’s what I’d call a “relaxing read”.

It has some suspense to it and held my attention from beginning to end. The supporting characters (aka suspects/victims) are entertaining and interesting.

The main characters (aka the detectives) are entertaining, but we don’t really learn a lot about them on a personal level.

It’s the “what happened” that draws in the reader. If you like an old-fashioned mystery without all the violence and gore, this is a wonderful read.

I really enjoyed this book and the different avenues the author used as he takes readers into a complex mystery.

Rosie Young and Vince Mendez are detectives and partners, when they are investigating the apparent suicide of 30-year-old Sandra Dunne, something strange happens.

Miss Dunnes’ body is missing, not only that, but then she is found to be very much alive.

When this scenario repeats itself again with an artist named Mason. the detectives are in for a murder mystery like none other.

I have to say the author surprised me a couple of times ( definitely a good thing) and writes a great believable story. I will have to look for more from this author and think many readers are going to feel the same way!

To my delight, I had barely gotten my feet wet just a few pages into the storyline when I was assaulted by an unexpected twist.

What a glorious way to jump-start the novel! From the very beginning, the timing of the scenes kept pace with a building momentum to an intriguing plot. As the tale progressed, familiarity soon set in for the main characters as their personalities began to shine through.

Finishing with a blaze of glory, there was an unexpected turn of events in the end that I never saw coming. It was the perfect nightcap to a fascinating read.

Homicide detectives Rosie Young and partner Vince Mendez made a good team. They were good at what they did – solving homicides.

Though all that was about to change in dramatic fashion when they were called upon to solve the latest case. It would be the one that would stand out among the rest.

What lies ahead would turn out to be the mother lode of all murder mysteries.

This book was well-written, easy to read and comes recommended.