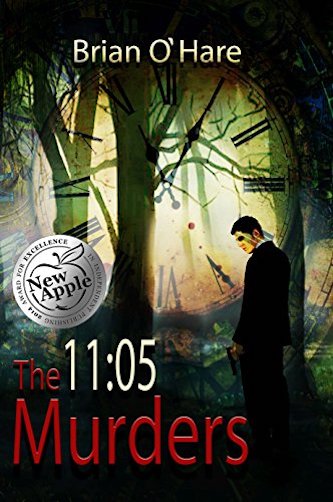 Three people are murdered on separate Tuesday evenings at precisely 11.05. Random clues point to random suspects, but too many questions remain unanswered.

Who is the violent stalker who twice nearly kills Detective Allen?

What is his connection, if any, to the murders?

When one of his team is kidnapped, Inspector Sheehan has literally only minutes to make sense of these questions if he is to save his colleague’s life.

The first thing I thought after reading this book is: why isn’t Brian O’Hare better known in the crime writing world? This man is extremely talented, and his book a wonderful whodunnit that left me guessing until the end.

O’Hare masterfully tells a tale of obsession, lust and political maneuvering. Set in Nothern Ireland, we start with a sexual assault on a young college woman that happened twelve years ago. We are then brought back to the here and now with the violent murder of an unethical loan officer. His connection to the sexual assault soon becomes apparent, and before long the body of another man from that era comes to light. One more man from that fateful day is still alive, and the police must save his life and catch the clever killer.

But there’s so much more between these pages. Amazing dialogue and setting, for starters. Intricate plotting and a vibrant pace. But where O’Hare shines is in the brilliant characters he’s created. Stewart, the beautiful but standoffish sergeant, is one of his best. She is smart, sexy and dedicated to her job, and yet troubled at the same time. Her budding romance with a fellow police officer is masterfully told. But his character, Mike ‘The Bat’ Weir is a brilliant portrayal of a villain, a monster in all respects. I could read an entire novel with these two in it.

If you love police crime novels, you must read O’Hare. I have to say, I was unsure of what I was getting into after glimpsing the uninspired title. Don’t let that put you off because it doesn’t do this brilliant novel justice. Also, the novel needs better proofreading and formatting, but these are minor quips in view of his unique talent as a writer. I can’t recommend this book enough. I’m so glad I discovered this author. Highly recommended!

Someone is killing men on Tuesdays at exactly 11:05 pm. Now WDS Denise Stewart and the other officers of Serious Crimes Division are on the job. The suspect pool is large and muddied with lies, finger pointing, and half-truths. Now Denise is new to the SCD and has to get used to Chief Sheehan and how he runs his division.

Not only that she suddenly has the feeling she’s being watched. Now the big questions are who is the killer and is someone stalking Denise? To find out you’ll have to read this great thriller.

The author writes a thrilling murder/mystery that keeps you guessing to the end. Normally I can figure out who done it before the end but this one kept me wondering. I really enjoyed that. I enjoyed how the characters seemed to come to life for me and have no complaints about this book. I give it a solid strong 5. This book is an OnLineBookClub.org Book of the Day.

Please click HERE to find the 11:05 Murders on Amazon.