Daily Review: The Case of the Tattooed Buttocks by Alan Hardy 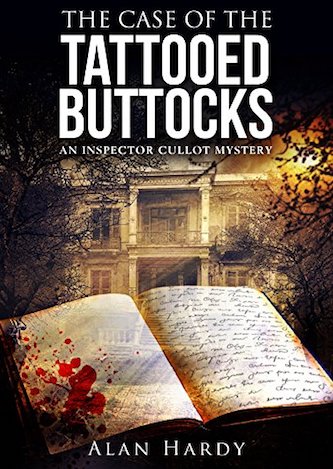 It will make you giggle and will give you a few chills as the story twists and turns in a classic “who-done-it” murder mystery.

Following the murder of a sexy, blonde bombshell (and, soon after, the bloody, gruesome, shocking murder of yet another sexy broad), ex-Inspector Cullot is called in to team up with his old side-kick, Detective Sergeant Watkins, to investigate the baffling crime.

Together they set about solving the mysterious deaths at Bounderdales, the opulent mansion of the oil magnate, Henry Barble. A small group of the rich, decadent, sophisticated and ultra-sexy is staying at the mansion. What secrets is each of them harbouring? Who are the guilty parties? And what is the dark secret from his own past which causes Cullot’s frequent moments of dark despair?

Why did he leave the Police Force? Did he jump, or was he pushed? Why does he now work in a department store, in Ladies Underwear? The police constable first on the scene of the initial murder, PC Blunt, is ready to record every detail of the case, and assist his colleagues in their work. But what is his own past..? Is he as half-witted as he seems?

What about gorgeous, sexy blonde bombshells, Stephanie and Gloria? And louche, limp-wristed Anthony Newhome? And Barble’s son, Oswald? And Barble’s demure, bespectacled secretary, Abigail? And ex-movie star, Janice Butler? Are they all who they say they are, or are some of them involved in a deadly game of murder and revenge? How are these murders linked to the unsolved Night-Club Hostess Murders which took place two years earlier?

And, most puzzling of all, what is the meaning of the tattoos on the gorgeous buttocks of the assembled ladies? Thrill to the suspense, the heart-ache, the twists and turns, the laugh-a-minute of this hilarious, baffling mystery.

Get ready to follow the roller-coaster plot, with one surprise after surprise, and scintillating word-play and sparkling dialogue between the marvellous host of characters. Will you be able to work out who did it? A detective/murder mystery like no other…

What a hoot! This was such a fun read! Reminiscent of Agatha Christie’s Ten Little Indians and the Hercule Poirot mysteries, Tattooed Buttocks keeps you guessing until the final pages. Unlike Christie, however, Buttocks has a decidedly raunchy turn and the antics of PC Blount will keep you in stitches throughout.

Of course, the genius in this novel is the renown ex-Inspector Cullot, who, since leaving the force, has taken a position in ladies’ undergarments (an employment he rather enjoys)!

Mr. Hardy adeptly takes the reader on a thrilling ride. The novel is peopled with quirky characters and takes unexpected twists and turns that keep you on the edge of your seat. The dialogue is witty and, I can tell you, the image of the lovely ladies of the piece baring their buttocks for Cullot, Watkins, and Blount had me laughing aloud.

This is the first book I have read by Mr. Hardy and I am impressed. It is a very well written work that is not only an excellent who-done-it, but also a wonderful farce, and I recommend it most highly.

Having been an avid reader for many years, I believe I have not come across an author quite like Alan Hardy. It seems he has created his own unique writing style which cannot be compared to anyone. Hardy is not confined to a genre or a series and is one of those authors that can write about anything. Although each of Hardy’s books is completely different, his trademark wit and sense of dry humor are always there (hmmm, could it be that there is just a bit of a jab at that well-known book-made-movie about the girl with the dragon tattoo?) Tattooed Buttocks wins every time.

This book like Hardy’s other books will entertain you. It will make you giggle and will give you a few chills as the story twists and turns in a classic “who-done-it” murder mystery where you will be trying to figure out who the murderer is. Throughout the story, the author weaves a tapestry of chills and humor making for what I consider the complete package; very entertaining.

The characters are interesting and believable and like many of Hardy’s characters, they have unusual hang-ups and quirks, kind of like those people we know in our real lives. Hardy’s writing is honest and refreshing, showing us a glimpse into some of the twisted fantasies that many of us keep secret.

The Case Of The Tattooed Buttocks would make a great movie or mini-series. It could work. Hardy’s witty work, acted out in a British PBS mini-series would be awesome, although as I was reading it, I kept finding myself picturing the story acted out on a live stage; perhaps off-Broadway. Please do read it and you will see what I mean. Five stars!

Please click HERE to find The Case of the Tattooed Buttocks on Amazon.