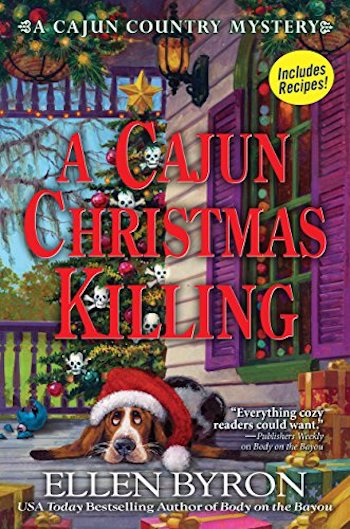 Someone is out to sabotage businesses, relationships, families, careers and lives!

Maggie Crozat is back home in bayou country during the most magical time of the year. In Pelican, Louisiana, Christmastime is a season of giant bonfires on the levee, zydeco carols, and pots of gumbo. Except, this year, the Grinch has come to stay at the family-run Crozat Plantation B&B. When he floods travel websites with vicious reviews,

Maggie thinks she’s identified him as rival businessman Donald Baxter. That is, until he’s found stabbed to death at Maggie’s workplace. And Maggie and her loved ones become top suspects.

The Crozats quickly establish alibis, but Maggie’s boyfriend, Detective Bo Durand, remains under suspicion. With Bo sidelined during the investigation, Maggie finds herself forced to work with an unlikely ally: longtime family enemy Rufus Durand. Her sleuthing uncovers more suspects than drummers drumming, and lands her in the crosshairs of the murderer.

The sleigh bells are jingling, and the clock is ticking for Maggie and Rufus, who must catch the killer or it will be the opposite of a Joyeux Noël in A Cajun Christmas Killing, the recipe-stuffed third installment of USA Today bestselling author Ellen Byron’s Cajun Country mysteries.

This is a wonderfully entertaining read from start to finish! The Crozats and Durands are two of the founding families in Pelican, LA and they’ve been feuding since before the Civil War. Pelican has found itself with a surge in murders in recent months and the locals want to find a way to come together and celebrate a safe and normal Christmas on the Bayou.

They are used to having beautiful decorations throughout the town and elaborate decorations at the antebellum homes Crozat B & B, Doucet and Belle Vista. Along the riverbanks, people built bonfires that would be lit on Christmas Eve.

Some were just in pyramid shape, some were in the shape of the home and someone once built one that was a mini pirate ship. In the midst of all this fun time of the year, evil is lurking. Someone is out to sabotage businesses, relationships, families, careers and lives! The Crozats and Durands find themselves in a new set of circumstances.

They decide to join forces with the common goal of finding the killer before more lives are lost!

It’s Christmas time in Cajun country and Maggie Crozat couldn’t be happier to be at her childhood home in Pelican. Aside from having a rude guest staying with them, some grinchy person is leaving negative reviews on a popular travel review site. Ever the diligent internet user, Gran’ will not stop until she’s gotten every single one of them removed especially after they get to the bottom of what was causing them. Although that doesn’t come until after the rude guest they have staying with them turns up dead at Doucet Plantation where Maggie works as a tour guide.

Maggie’s police detective boyfriend Bo is a person of interest in the case so he’s sidelined at his desk for the duration of the investigation which leaves Maggie on her own some of the time but also working with Ru, Bo’s cousin that she never thought she’d be able to work with. However, being a dad has changed Ru and he’s more cooperative and willing to work with her especially since he knows her sleuthing has been helpful a couple of other times. A couple of attempts on lives as well as another murder, make Maggie even more antsy to get the answers to this case before Christmas gets there and all the traditional fun of the bonfires begins. Hopefully she can find this person before they find her!

I love the whole Christmas season so I really enjoyed this third installment in the Cajun Country series. I like how Maggie’s former nemeses, Vanessa and Ru are now friends with her and she can actually count on them when she needs to. As always I just love Gran’ and how she enjoys looking up things online and doing research. I had to laugh out loud at the part where everyone is gathered around the big screen to see Mass at the Vatican with Pope Francis. Pelican is especially proud because their own priest is there at the Mass. It was so hilarious when they caught him taking a selfie amid all the other religious leaders at Mass! He was tweeting different things leading up to Christmas Eve as well. Even Gopher the dog had a little moment in the spotlight earlier in the book.

Ellen Byron describes things so vividly that I can just picture myself at Crozat Plantation or really anywhere she has her characters visiting in the story. She’s an awesome story teller and it’s always evident that she’s really done her research and homework, that she truly loves Cajun Country. Since Bo and Maggie are growing ever closer, I can’t wait to see what the next book brings for them!