CW Hawes: One of the Top 25 Mystery Writers You Need To Be Reading 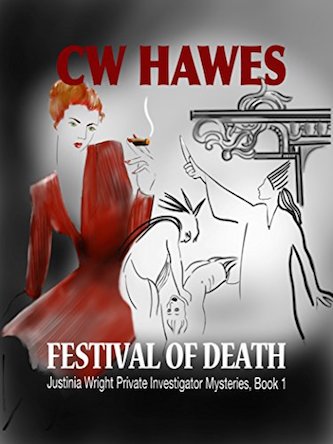 Writing for those who enjoy detective novels with good stories, well-developed characters, and good dose of wit.

CW Hawes is a novelist and short story writer, as well as an award winning poet.

His interests are wide ranging and this is reflected in both the genres and the contents of his books. He is the author of “The Rocheport Saga,” a post-apocalyptic series set in America’s mid-west; the Justinia Wright, Private Investigator Mysteries series; the alternative history Lady Dru Drummond novels, where World War II never happened and swing is still king; and the “Pierce Mostyn Paranormal Investigations” series.

His love of fine food, interesting locations, philosophy, music, art, books, and history can be seen in each of his tales.

CW was born and raised in Cleveland, Ohio and made his home in Minneapolis, MN for the past 45 years. He recently moved to Katy, Texas.

A missing person. A mysterious cult. And a PI who’d rather play the piano.

Private detective Justinia Wright hates missing person cases. But her “Watson” and brother has tricked her into taking this one. Only these kidnappers will do anything not to get caught — including kill her friends or the detective herself.

Festival of Death is the first book in CW Hawes’s Justinia Wright, Private Investigator Mysteries series. Justinia is a sassy and quirky detective with plenty of panache. If you like Sue Grafton, Sara Paretsky, Marcia Muller, and Rex Stout’s Nero Wolfe you’ll love this series that combines their best traits in a captivating whodunit that will keep you on the edge of your chair. 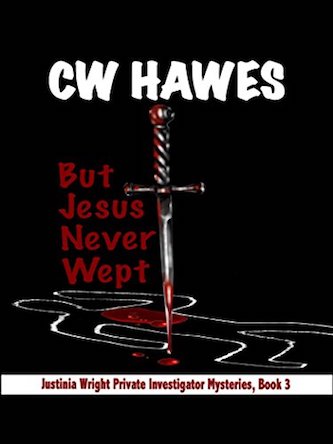 A minister who believes Jesus never lived. Murder by hari kari. An internet brothel empire. What does it all mean?

That’s what private detective Justinia Wright and Harry, her brother and sidekick, have to find out. To do so, they have to get the prime suspect off the hook and that puts Tina in the crosshairs of her friend and lover, Lieutenant Cal Swenson of Homicide.

In the cold and wintry land of Minnesota Nice, Tina and Harry once again cross paths with those who don’t play nice. Those who’d rather see you dead than at the church lutefisk supper. A case whose roots go back into the past and to the Cool, Grey City of Love. A case where love just might be the root of all evil.

But Jesus Never Wept is the third book in CW Hawes’s Justinia Wright, Private Investigator Mysteries series. Fans of the traditional mystery , Nero Wolfe, and Hercule Poirot, will love this whodunit where nothing is as it seems and love does not conquer all. 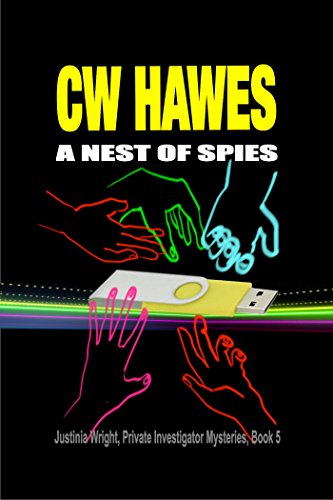 A Nest of Spies

A hidden past. A simmering vendetta. And a secret weapon everyone’s willing to kill for.

Ace private eye Justinia Wright is in no mood to work. However, her brother and assistant, Harry, likes a paycheck and goads Tina into taking a case.

At first it all seems simple enough. Find a flash drive. But one death, is followed by a second, which is followed by a third, and then a fourth. With Tina being framed for two of the murders, time is running out. The FBI are closing in and threatening to invoke the Patriot Act. Will Tina be able to pull enough strings fast enough to get herself off the hook and cash in on a big fat fee? Or will she disappear into a secret Federal facility somewhere?

A Nest of Spies is the fifth book in the Justinia Wright, Private Investigator Mysteries series. If you like traditional mysteries, along the lines of Nero Wolfe or Hercule Poirot, with wise-cracking humor and enough thrills and spills to keep things interesting, then you’ll love this latest installment in CW Hawes’s page-turning series. 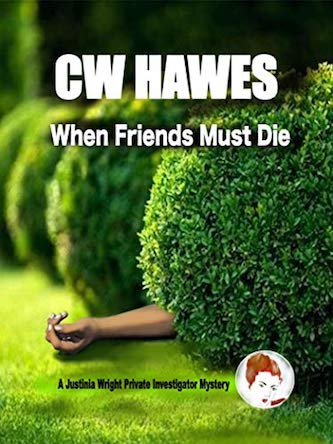 When Friends Must Die

The heir to a cookie empire is missing. And his friends don’t want him found.

Private detective Justinia Wright doesn’t like missing person cases. But her brother, Harry, goads her into taking the Distad case for a nice fat fee.

The investigation is moving along just fine, when all of a sudden it all begins to fall apart. No one wants to cooperate. Tina and Harry are at odds. And worst of all Tina goes into a funk and simply stops working.

Will she come out of her funk in time to pull everything together, find the killer, and earn her fee?

When Friends Must Die is the sixth book in the Justinia Wright Private Investigator Mysteries series.