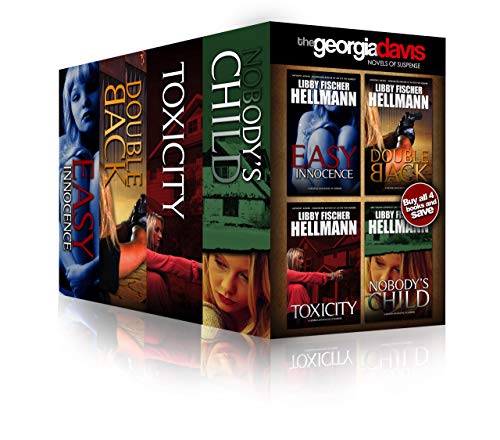 Hellmann writes in many genres, but her Georgia Davis series may just be one of the best crime thriller series being written today.

PI Georgia Davis burst on the scene in Libby Fischer Hellmann’s suspense thriller EASY INNOCENCE (2008). That was followed in 2009 by DOUBLEBACK, a cross-country thriller that reunited Georgia with Ellie Foreman. TOXICITY, the prequel to the thriller series written when Georgia was still a cop, was released in 2011. NOBODY’S CHILD, 2014, in which Georgia discovers a half-sister in big trouble, has now joined the others so that FOUR of the FIVE thrillers are now together in one volume at a very affordable price.

When pretty, smart Sara Long is found bludgeoned to death, it’s easy to blame the man with the bat. But Georgia Davis — former cop and newly-minted PI — is hired to look into the incident at the behest of the accused’s sister, and what she finds hints at a much different, much darker answer.

It seems the privileged, preppy schoolgirls on Chicago’s North Shore have learned just how much their innocence is worth to hot-under-the-collar businessmen.

But while these girls can pay for Prada pricetags, they don’t realize that their new business venture may end up costing them more than they can afford.

Little Molly Messenger is kidnapped on a sunny June morning. Three days later she’s returned, apparently unharmed. Molly’s mother, Chris, is so grateful to have her daughter back that she’s willing to overlook the odd circumstances.

A few days later, the brakes go out on Chris’s car.

An accident? Maybe. Except that it turns out that Chris, the IT manager at a large Chicago bank, may have misappropriated three million dollars. Not convinced that his daughter is safe, Molly’s father hires Private Investigator Georgia Davis to follow the money and investigate Chris’s death.

Doubleback, the sequel to the acclaimed Easy Innocence, reunites PI Georgia Davis with video producer Ellie Foreman (An Eye For Murder, A Picture Of Guilt, An Image Of Death, A Shot To Die For).

The two women track leads from Northern Wisconsin to an Arizona border town, where illegal immigrants, smuggled drugs, and an independent contractor called Delton Security come into play. Georgia and Ellie go to great lengths to find the truth, and Georgia discovers that you can cross a line, but sometimes you have to double back.

There’s an inventive killer at large in Chicago in this dark thriller and police procedural from best-selling crime writer Libby Fischer Hellmann.

When three bodies turn up in rapid succession, all in landfills or waste disposal dumpsters, rookie cop Georgia Davis is drawn into the investigation.

Teaming up with her detective boyfriend Matt and his friend Detective Sergeant John Stone, Georgia must work out who’s responsible for the killings, but there’s little evidence to go on. The case also tests the strength of Georgia’s relationship with Matt—complicating the situation is the daughter of a real estate mogul, who also happens to have her eye on Matt.

Who’s behind these gruesome killings in this normally quiet neighborhood? Why are children developing cancer? And will Georgia’s relationship withstand the demands of this particularly complex investigation?

Fans of Libby Fischer Hellmann’s gripping Georgia Davis PI series will enjoy getting to know a younger Georgia Davis in this thrilling prequel, which finds her ten years before Easy Innocence and Doubleback.

Deftly weaving emotional pressure into an engaging plot centered on a tangled web of mystery and murder, ToxiCity is a must-read addition to the libraries of crime fiction enthusiasts the world over.

A bloodstained note left for PI Georgia Davis reveals the shocking existence of a half-sister she never knew about. Her sister, Savannah, is pregnant and begging for Georgia’s help.

Determined to track her down, Georgia finds herself heading deep into the secretive and dangerous underworld of Chicago’s illegal sex trafficking business.

She soon discovers that trafficking is just a small part of the horrifying and deadly situation in which her new sister is caught up. Even worse, as Georgia tries to extricate Savannah, she comes up against an old enemy determined to make sure neither woman will escape alive.

In the fourth Georgia Davis novel, Georgia faces her toughest challenge yet—and one she might not survive.

Please click HERE to find the boxed set of the Georgia Davis PI Series on Amazon.