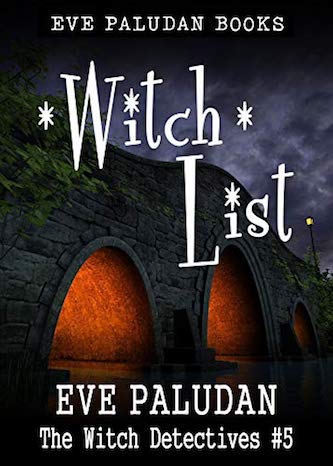 In WITCH LIST, the fifth novel of the series, enchantress witch Elle, werewolf – warlock Fergie, and spell witch Rebecca face their most difficult case yet, when a stolen medieval document leads them to discover a 450-year-old curse—a curse they need to break—and it’s do-or-die time!

When a medieval document is stolen from a London import-export broker of witchcraft antiquities, the witch detectives connect it to the murder and magical mayhem that has plagued two Scottish families for centuries. But the stakes are raised even higher when they learn that the purloined parchment is to be the ransom for two kidnapped witches. But where is it? And where are they?

In this multi-layered witchy mystery romance novel, Elle and Fergie explore their growing romantic feelings when they join their supernatural powers to fight the escalating danger, solve crimes, and break a dark enchantment. As Rebecca struggles after losing everything to the Edinburgh coven, she hides her own secrets.

When Elle decides to recruit her enemy, Niall, a powerful enchanter who was once her lover, they’ll need to break a dark spell on him, too! And Niall’s pulled into the investigation, whether he likes it or not!

From London to Bath to the stone circle at Avebury, join Elle, Fergie, Rebecca, and Niall in a new mystery case as the Scots race around England to try to recover a stolen artifact, rescue kidnapped English witches, and break a curse that could spell the end for them all—a curse that even poses a threat to the royals…

AN ENCHANTRESS. A WEREWOLF – WARLOCK. A SPELL WITCH. Magic, mayhem, and murder are all in a day’s work for witch investigators from Scotland when they seek a stolen medieval document to pay the ransom for two kidnapped witches. But first, they have to break a 450-year-old curse.

They soon discover they can’t do that without the help of their most-diabolical enemy.

But will Niall the enchanter help or hinder this investigation?

Will his enchanted obsession with Elle prove fatal, or create a love triangle that could destroy her new love with werewolf hunk Fergie?

And will they ever make it back to Scotland with their stones intact?

She also swims a lot.

Ms. Paludan has done it again.

The twists and turns this book took leaves me breathless.

After being resurrected by her Mother’s spirit, Ell and her witch detective friends are hired to find a stolen document.

One that links Niall Sampson’s and Ell’s past to a blood curse. Oh, and Ell discovers she has an uncle – her mother’s unknown brother Basil.

Ell also has found the love of her life in Fergie.

There is so much more I’d like to say but they are all spoiler alerts. Now to wait for the next book to come out!