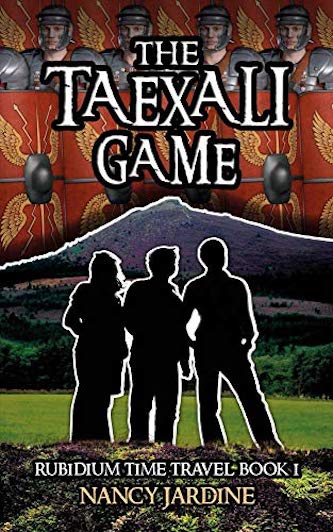 Ancient Caledonia in AD 201 is awesome! Life is expendable. Survival is not guaranteed.

When the Rubidium Time-Leap flips Aran and his two best friends back to AD 210, the reality is incredible. Their task list includes solving a local mystery but, when Roman Emperor Severus and his legions heap death and destruction on the local tribes, it’s horrifying.

Giving help to Celts and Romans alike becomes a lethal assignment—some local chiefs are as foul as Severus and his beastly son Caracalla. Dicing with death becomes the norm for the time travellers.

Will Aran complete the mission and return home unharmed?

“If you’re looking for a novel with a difference, that combines time travel with ‘computer generated’ game play and ‘real life’ action, that educates as it entertains… you may well have found it.”

The Taexali Game will appeal to readers from early teens onwards who are interested in adventure fiction set in Roman Britain.

This combination of fantasy and history, linked by an interactive computer game, is sure to appeal to a wide audience.

The geographical location of the story is used well in this tale of the attempts of the Romans to subjugate the peoples of the North and though there is little historical evidence of events, the writer skillfully creates a most believable world.

The characters are well-drawn and the action is fast-paced as befits the idea of a computer game. As Aran, Fianna, and Bruce attempt to complete the tasks set by Callum, we are swept back to a time far more dangerous than our own and are able to explore the risks of time travel from the comfort of an armchair.

This is the first in a series and the underlying premise of a particular kind of time travel promises well for future stories.

Please click HERE to find The Taexali Game on Amazon.