Featured: The Secrets We Hide by Patricia Sands 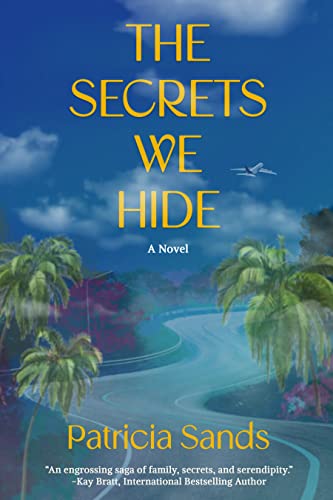 Review: beautiful story of resilience perfectly balances the heartbreak and destruction of mental illness with the compassion and serenity.

The deep traditions and values of Kaito Tanaka’s Japanese heritage are severely tested when he returns home to Honolulu from duty in Vietnam to find his wife, Hana, in the grip of progressive mental health challenges.

As Hana’s condition worsens, Kaito’s life becomes absorbed in protecting and caring for her and their daughter, Kiana. Hana becomes increasingly reclusive while their daughter Kiana grows troubled and rebellious.

A friend’s mysterious death followed by Kiana’s sudden disappearance cut deeply into Kaito’s soul. Meditation is Kaito’s drug of choice. Secrecy hides the truth from others but Kaito’s commitment to Hana is unwavering.

As years go by, Kaito begins to make an annual pilgrimage to a Buddhist retreat in Koyasan that renews his spirit. In the end, a serendipitous coincidence there opens the door to happiness – if he can allow himself to accept it.

Patricia Sands lives 2 hours north of Toronto, but her heart’s other home is the South of France. She spends part of each year on the Cote d’Azur and once a year leads a women-only tour of the Riviera and Provence based on her novels.

Her award-winning 2010 debut novel, The Bridge Club, is a book club favorite and in December 2020, the Tenth Anniversary edition was published ~ the original story with revisions and a new Epilogue.

The Promise of Provence, which launched her three-part Love in Provence series was a finalist for a 2013 USA Best Book Award and a 2014 National Indie Excellence Award, an Amazon Hot New Release in April 2013, and a 2015 nominee for a #RBRT Golden Rose award in the category of romance.

The Promise of Provence became Book No. 1 in the Love In Provence series. Promises To Keep ~ Book No. 2 was released in Summer 2014. I Promise You This ~ Book No. 3 was released in May 17, 2016. The series explores a mid-life coming of age and allows readers to lose themselves in the beauty of the south of France without leaving home.

Patricia was invited to join the Lake Union imprint (Women’s Fiction) of Amazon Publishing in January 2015. Her fifth novel, Drawing Lessons, also set in France, and a semi-finalist in the 2018 Somerset Literary Awards, was released by Lake Union Publishing on October 1, 2017.

From December 2018 to January 2020, Patricia published a series of novellas is in response to readers’ requests to spend more time with the characters from the Love in Provence series.

Celebrating the rewarding friendships and bonds women share, Sands’ stories examine the challenges life often throws in our paths. Location features prominently in all of her novels.

Her philosophy is that it’s never too late to begin something new, to seize each day and be a possibilitarian! As the saying goes, just do it! Hearing from readers (both men and women, from ages 20 to 84) is her greatest reward.

Patricia also contributes to such Francophile websites as The Good Life France and Perfectly Provence. Visit her online at www.patriciasandsauthor.com

Review by Barbara Claypole White, bestselling author of The Perfect Son and The Promise Between Us.

Set against lush backdrops in Hawaii, Japan, Corsica, and the south of France, this beautiful story of resilience perfectly balances the heartbreak and destruction of mental illness with the compassion and serenity of an unforgettable hero.

Please click HERE to find The Secrets We Hide on Amazon.